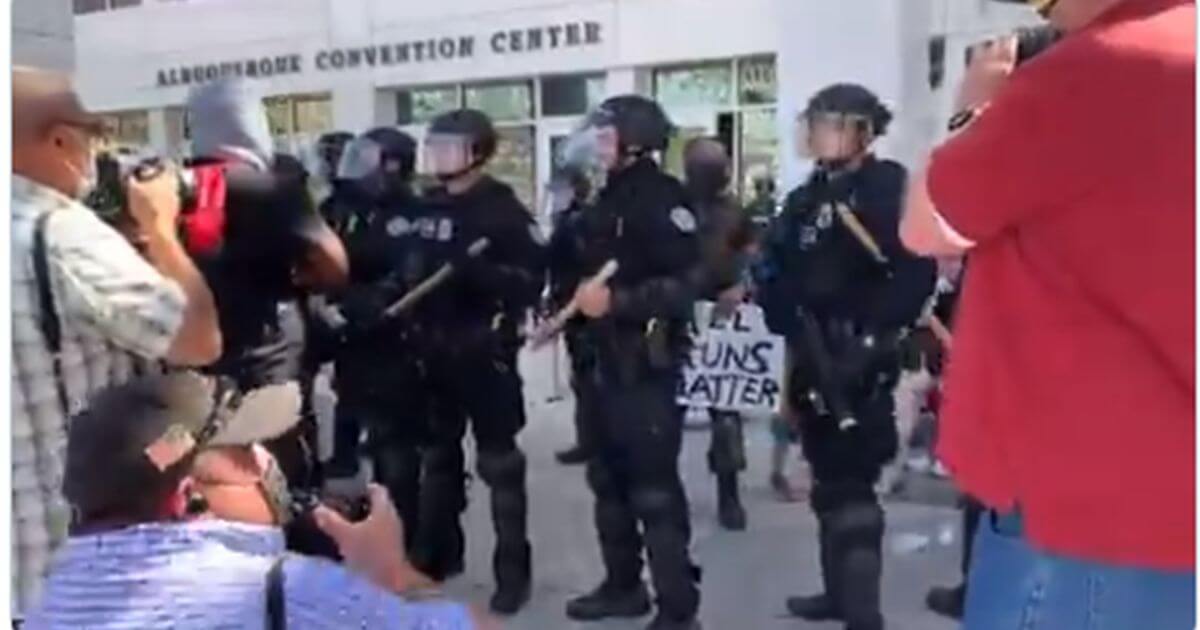 Several coordinated “White Lives Matter” rallies planned around the country appear to have flopped, as hardly anyone but the saintly “anti-fascist” and “anti-racist” protesters — the only valid activists recognized by polite society these days — showed up.

At least, that’s how you’ll hear it from the good folks over at NBC News, whose “disinformation” beat reporter Brandy Zadrozny glowingly covered the failed events.

“In semi-private, encrypted chats, neo-Nazis and other far-right extremists planned rallies in dozens of cities Sunday to promote their racist movements and spread their ideologies to larger audiences,” Zadrozny reported on Sunday.

“Hyped by organizers as events that would make ‘the whole world tremble,’ the rallies ran into a major problem: Hardly anyone showed up,” she added.

This is a bit of a problem for the establishment media narrative as a whole, as it happens, and our undeniably biased reporter spent the vast majority of her coverage on this white supremacist rally flop seemingly trying to convince us that the left-wing counter-protesters who enjoyed a much heartier showing on Sunday are basically keeping the pervasive threat of white supremacy at bay.

Zadrozny didn’t delve much into who, exactly, planned the ill-fated rallies, but she did seem to almost trip over her opening paragraphs to tell us that the failed events were alleged to have been planned by the same folks who brought us the Jan. 6 Capitol Hill incursion.

Either way, she was certain of who we have to thank for the virtually non-existent turnout of racists on Sunday: the left-wing establishment, basically.

“The poor showing underscores how the country’s unpopular and disorganized extremist movements have been driven underground by increased scrutiny from the media, law enforcement agencies and far-left activists who infiltrate their private online spaces and disrupt their attempts to communicate and organize,” Zadrozny importantly informed us.

Well, I think it’s safe to say no one could ever possibly accuse left-wing activists of being subject to excessive scrutiny from media or law enforcement to the point of driven underground.

Quite the opposite, in fact, many would argue, as Zadrozny’s reporting — and her Twitter feed — clearly indicates.

She proudly reported that at one flopped White Lives Matter rally in Raleigh, North Carolina, “antifa and anti-racist protesters” marched around downtown behind a large white sign reading, “WE ACCEPT YOUR SURRENDER.”

I’m not sure this could be considered a hard-fought surrender, considering Zadrozny just told us everyone even slightly right of the My Pillow guy is quite literally treated like a terrorist and a menace to society these days.

In Philadelphia, the Nazis GTFO! Picnic Against Hate showed up to counterprotest a White Lives Matter event that never came to fruition, something which the activists counted as a big win.

A lone “All Guns Matter” protester showed up in downtown Albuquerque, New Mexico, where local activists were outraged law enforcement formed a line between him and the crowd.

What they’d planned to do to the man had law enforcement not been there is anyone’s guess, but it hardly speaks highly of their movement that they were actually upset the police protected a practitioner of the First Amendment from an unruly mob.

Counter protesters are pissed that APD showed up to protect and escort “all guns matter” guy into the convention center pic.twitter.com/jKLGvOs6vd

While it’s not at all clear if the “All Guns Matter” guy was a neo-Nazi, the protesters were convinced they knew who the real Nazis were:

There were also failed events in Forth Worth, Texas, and Huntington Beach, California, where a few random folks donning “White Victims Matter signs” or thin blue line shirts were far outnumbered by leftist protesters celebrating their decided victory over all racism, ever.

One of the organizers of the White Lives Matter rally is now outside Fort Worth City Hall. She said others are on their way but are running late. pic.twitter.com/I1aaPHFe5g

Interestingly, Zadrozny didn’t delve much into who the groups behind the protest were. This was my immediate burning question on this story, considering how liberally the media employs the term “white supremacist” these days.

While she did cite reporting from anti-fascist activists who infiltrated Telegram chats where the events were being planned, including screenshots of neo-Nazi imagery and suggestions of white supremacist ideology from some of the organizers, allegedly, she only bothered to mention the controversial, far-right, occasionally criminal — yet not actually ideologically white supremacist — Proud Boys.

Regardless of who organized the rally, reading this steaming pile of supposedly objective reporting makes it abundantly clear that white supremacy is simply not a prevalent phenomenon in our society.

White supremacy most certainly exists, as any perusal of the far reaches of internet forums or the infamous tiki torch-bearers of Charlottesville will show us. Yes, genuinely racist people say “white lives matter” as a response to the far-left Black Lives Matter movement, and it is a response that could easily be accused of being insensitive to the statement the albeit undeniably radical group is trying to make.

All life matters — it is a fact, and it remains troubling that it’s so controversial to affirm the value of white life that a seasoned reporter for a major news outlet whose beat is literally “disinformation” doesn’t seem to notice the distinction.

In fact, she unironically equates it with racism while glorifying the types of protesters inarguably causing far more violence and terror to our communities than the white supremacists who can’t even hold a single rally, let alone several coordinated ones.

What’s more, if these same left-wing protesters were so gloriously successful at combating white supremacy, are we still supposed to buy their line that our system is literally systemically white supremacist?

If the most seethingly vile and hateful groups in our country can’t even show their face in public, perhaps we can agree that theirs is simply not the driving ideology of our nation, and hasn’t been for a very, very long time.