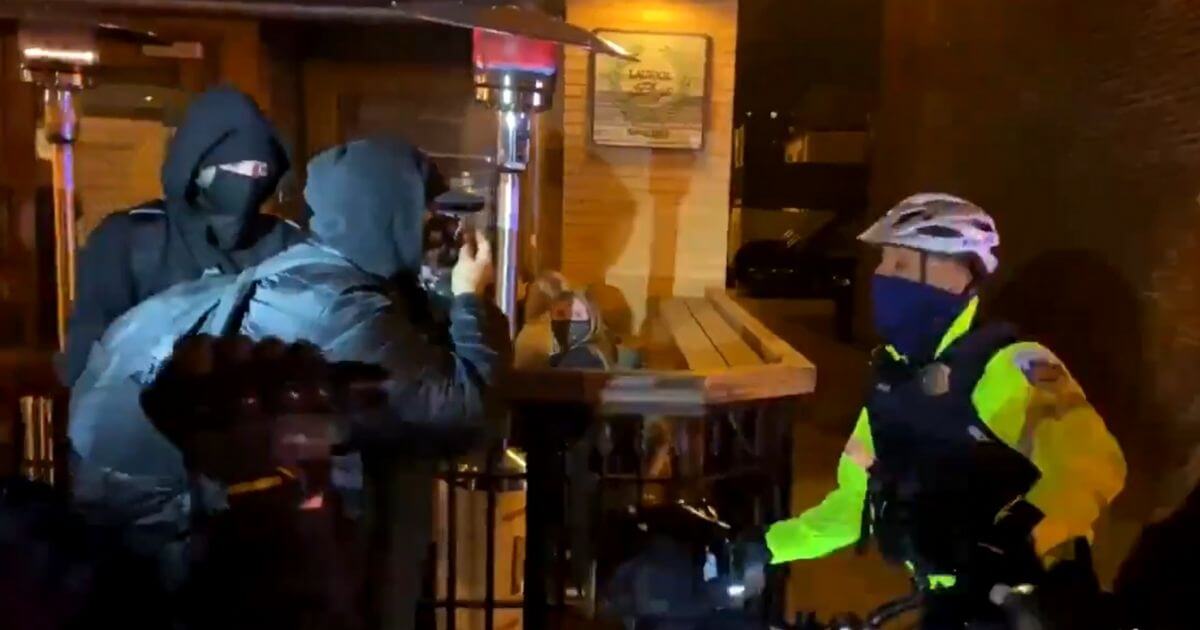 Black Lives Matter and antifa protesters continued their performance-art “activism” by antagonizing police officers and yelling at civilians during a march in Washington, D.C., on Saturday.

The event was touted as the “DC Queer and Trans Black History Month March and Rally.”

It was organized by the black activist groups Total Liberation Collective and the Palm Collective, according to Fox News.

As they marched through residential neighborhoods and terrorized restaurant patrons, protesters shouted: “Black lives, they matter here!” and “If we don’t get it, burn it down!”

Basically, the left-wing agitators threatened to torch D.C. if they didn’t get what they want.

“Burn it down,” they chant.

“We are here tonight because black lives matter,” the group said, repeating the words of a man with a megaphone. “Despite black lives mattering, black people are still dying at the hands of the police paid for by our tax dollars.”

The march ends with a speech honoring Eric Garner as the group wraps up tonight’s protest in DC #DC #DCProtests #WashingtonDC pic.twitter.com/hw8kcHklrI

“ACAB” chants as the group mobilizes once again in DC on this Saturday night #DC #DCProtests #WashingtonDC pic.twitter.com/CGaOPKtD0u

At one point, the mob scuffled with police officers in front of a restaurant.

An officer swats away one of the flashlights, leading to brief clashes as police push forward into the crowd in front of outdoor diners here in DC #DC #DCProtests #WashingtonDC pic.twitter.com/UuA76fH5X4

Predictably, the same liberal peanut gallery that hyperventilated when Trump supporters marched for election integrity on Jan. 6 did not condemn the violent threats of the BLM and antifa thugs this weekend.

The establishment media are afraid to criticize Black Lives Matter because they’re terrified of being smeared as “racists.”

However, a growing number of black activists have slammed BLM as a Marxist terrorist organization that’s weaponizing white guilt and black resentment to destroy the country.

White neighbours kneel down and beg their black neighbours for forgiveness on behalf of whites for years of racism. Such a beautiful moment.#GeorgeFloyd #ICantBreathe pic.twitter.com/2CJRZheSeN

“They are Marxists,” Henderson told Fox Business in August. “Their intentions are to tear down the fabric of America.”

Carol Swain, an attorney and retired professor at Vanderbilt and Princeton, agreed.

She said BLM is a puppet whose strings are being opportunistically manipulated by the Democratic Party in its bid to secure unfettered political power.

“[Democrats] are using black people to advance a radical agenda that will be destructive to our nation, that will hurt all of us. And it’s hurting us right now.”

Levin, an attorney, pointed out that Democrats are howling about “systemic racism” when they have been running America’s big cities for the past 50 years. In other words, the “system” the leftists are protesting against is actually themselves.

Tellingly, all the cities that were torched during this summer’s BLM race riots have been run by Democrats for decades: New York, Atlanta, Minneapolis and Washington.

Why didn’t the left protest “systemic racism” when the U.S. had a black president in the White House for eight years?

BLM arson attacks overnight in Kenosha, Wisc. spread to the Bradford Community Church, a far-left universalist religious organization. The church’s sign in support of #BlackLivesMatter was consumed in flames. pic.twitter.com/u02CIwsnIm

So if you dare to criticize BLM or the left-wing agenda, liberals will just cavalierly defame you as a racist — even if you’re not white.

Levin said if we’re going to purge society of all vestiges of slavery, segregation and racism, why don’t we just purge the Democratic Party?

“The Democrats also fought against the anti-lynching laws,” she said. “[Since the 1960s] the Democrats have been manipulating black people for a long time. And they pay off the leaders. … Nothing good trickles down to the masses.

“The Democratic Party has stood in the way of black progress. It’s standing in the way right now.”

It Will Be A Disaster with Huge Unemployment and Deficit Increases