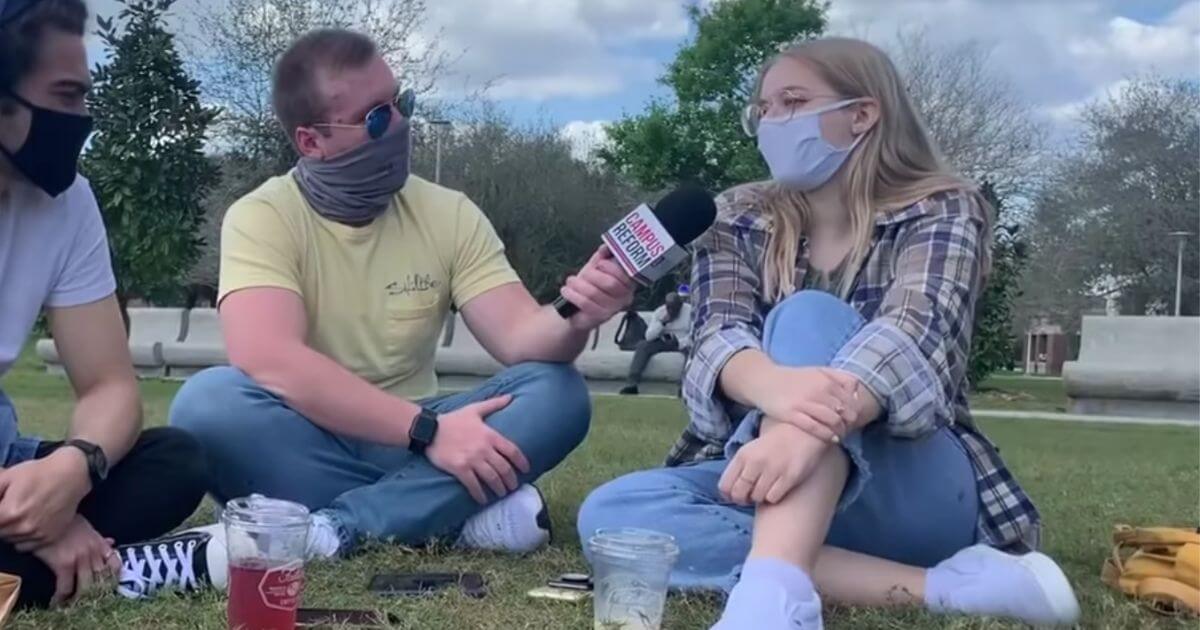 A new video revealed reactions from students in Florida when they learned that the Biden administration is using similar tactics as previous presidents with the ongoing border crisis.

Campus Reform’s Addison Smith asked a variety of students about “kids in cages,” wondering, “What will students think when they find out that [the current migrant facilities] are actually Joe Biden’s ‘cages’?”

While most of the students in the video seemed to condemn the “putting kids in cages” concept under the Trump presidency, many were shocked to learn that the images they were shown were of facilities used by the Biden administration.

“Would it surprise you if I told you that that was a holding cell that President Biden just opened about a week ago, and that those were not Trump’s, and Trump actually enacted a policy that ended the separation of children at the border?” he asked one student after showing her a photo of the facilities.

TRENDING: Fauci Moves The Goalposts AGAIN: ‘I Can’t Tell You’ When People Will Ever Be Able to Plan Indoor Weddings Again

“That is shocking because I did know that at all … basically everyone made Trump look like a bad image and he’s basically doing the same thing, so that’s very shocking I did not know that,” one student said.

Students also suggested that just because people perceived Biden to be a better leader when it came to immigration, that does not necessarily make it true.

“I don’t think that’s a solution. I don’t think there should be a double standard. I wouldn’t be OK with Trump doing it; I’m not OK with Biden doing it.”

While there is some action happening in the background to resolve the crisis at the border, the handling by the Biden administration is not vastly different than Trump’s actions.

The administration recently reopened the Carrizo Springs, Texas, migrant facility for children, and there is currently an overcrowding issue at several facilities, The Washington Post reported.

FEMA has not only been sent to assist with the issue, but a convention center in Dallas is going to hold 3,000 teenagers to help solve the problem, according to The Associated Press.

The Customs and Border Protection holding facility in Donna, Texas is at 729% capacity.

And still, the Biden admin refuses to acknowledge that there is a border crisis, even downplaying the situation by refusing to “get into the fun of labels.” pic.twitter.com/CX2exuvRJB

Students and members of the public may not be in the loop about conditions at the border because during his campaign, Biden gave the perception that he would not allow for migrant facilities to be overwhelmed.

The “kids in cages” narrative was echoed by many throughout the previous administration to highlight poor conditions at the southern border.

When children are ripped from their parents and put in cages, immigration justice is on the ballot. pic.twitter.com/gtSlFQAn5V

The lack of outrage from the establishment media and left-wing politicians during the current crisis is disturbing, and Campus Reform’s reporting is an indicator that there is an information gap between the coverage of the Trump and Biden border crises.

As the next generation of voters, students need to be aware that problems occur across multiple presidencies and try to understand the broader story on immigration issues.