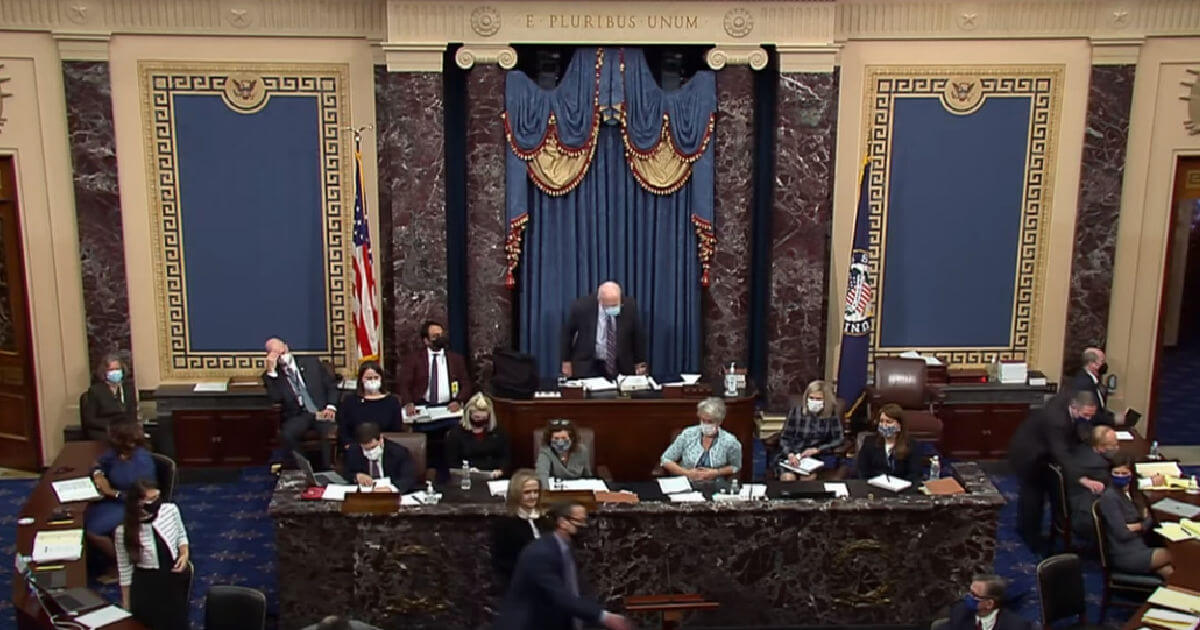 If you’ve caught any of former President Donald Trump’s impeachment trial over the past two days, chances are good that you’ve seen some of the footage they’ve been playing for the room — Hollywood film productions that recount the timeline of the attacks on the Capitol on January 6.

It’s true that the videos invoke an emotional response and are excellent at covering the events of that day, but Democrat House impeachment managers do not appear to have hit their goal of convincing Republican senators that the former president had anything to do with the attacks.

Multiple Republican senators found graphic videos of the deadly Jan. 6 attack on the U.S. Capitol upsetting but suggested they would not lead them to convict former President Donald Trump of inciting insurrection.

The House of Representatives’ Democrats prosecuting Trump in his second impeachment trial on Wednesday leaned heavily on the threat posed to Republicans, including then-Vice President Mike Pence, by hundreds of Trump supporters attempting to stop Congress from certifying his election defeat.

“Today’s presentation was powerful and emotional, reliving a terrorist attack on our nation’s capital, but there was very little said about how specific conduct of the president satisfies a legal standard,” said Republican Senator Ted Cruz.

Convicting Trump would require the votes of two-thirds of the 100 members of the Senate, meaning that at least 17 Republicans would have to join all 48 Democrats and the two independents who caucus with them.

The Senate on Tuesday in a 56-44 vote rejected an attempt to declare the trial unconstitutional because Trump left office when his term ended on Jan. 20. That margin suggested Democrats face an uphill climb in trying to convict the man who still remains popular with Republican voters.

Oklahoma Senator James Lankford on Wednesday appeared emotional at his desk after Eric Swalwell, one of the House impeachment managers, finished his presentation. Another senator, Steve Daines, put his hand on Lankford’s arm in what appeared to be a gesture of comfort.

But speaking to reporters later, Lankford struggled to connect the visceral images to any culpability for Trump, who in a fiery speech before the attack on the Capitol urged his supporters to “fight” his election defeat.

“He’s had 100 rallies and we’ve never seen that before. So that’s the tough one to be able to link together,” Lankford said.

Separately, Florida Senator Rick Scott said he was “disgusted” by the behavior of the rioters.

But asked whether Trump bore responsibility, he said, “You know, I’ve watched what he said. He’s never said that somebody should break in. He actually said that people should do this peacefully … Look, this is a complete waste of time.”

Kansas Senator Jerry Moran called the videos “heart-wrenching.” But asked if he saw a link between the footage and Trump’s words, he said: “I’ll wait ’til the conclusion of the trial.”

“But I don’t know that that’s going to make a difference for any one senator just having it on a loop again,” he said.

Trump’s lawyer, Bruce Castor, agreed the House impeachment managers’ footage was emotional, but he seemed unworried about his client’s chances.

“I believe it would have an emotional impact on any jury but … and we haven’t played ours,” said Castor.

Sure, Democrats might have captured the attention of the room and viewers at home, but at the end of the day — bottom line — if they can’t manage to convince a staggering 17 Republican senators to vote in favor of convicting Mr. Trump, it’s still nothing more than a giant waste of time and taxpayer money.

"In all, over 700 federal, state, and local law enforcement officers sustained injuries in violence perpetrated by Leftist rioters"

He Is 'Trying to Crush' Our Future