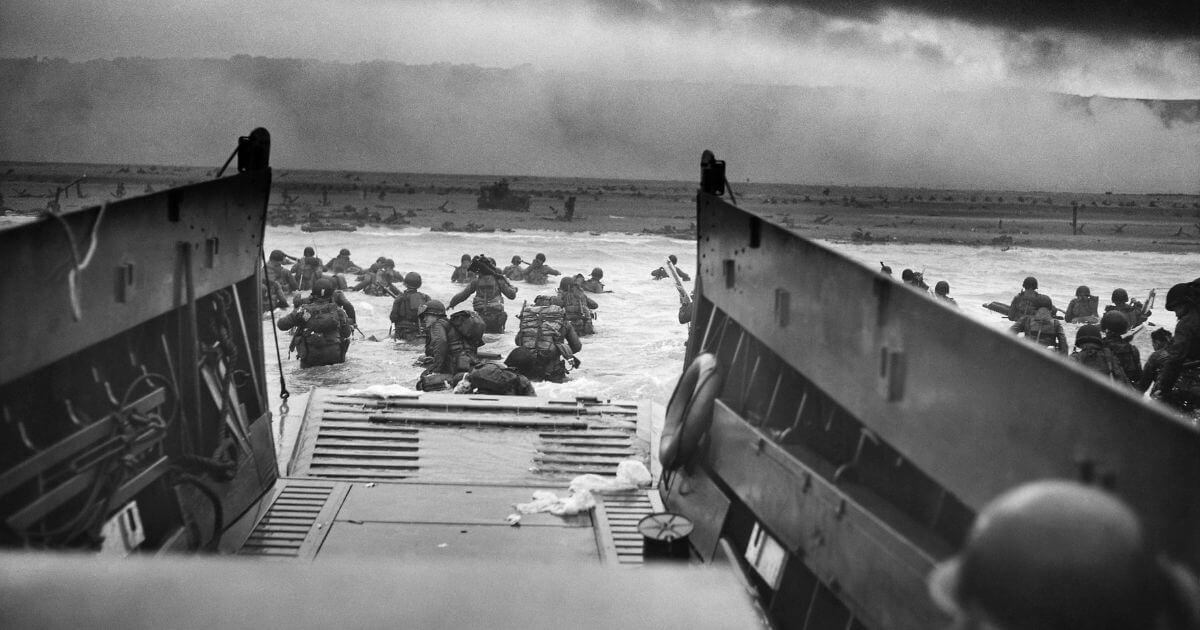 Left-wing reporter Alexander Nazaryan is so out of touch with reality that he compared his four-year experience covering the Trump administration to the hell on earth experienced by the brave men who stormed Omaha Beach in Normandy, France, on June 6, 1944.

Nazaryan, the national correspondent for Yahoo News, wrote a piece published Thursday in The Atlantic that went beyond disrespecting our country’s heroes. He derided their selfless actions by patting himself on the back for his oh-so-intrepid work sitting behind a computer and smartphone while covering a president he didn’t like.

“Covering the administration was thrilling for many journalists, in the way that I imagine storming Omaha Beach must have been for a 20-year-old fresh from the plains of Kansas. He hadn’t signed up for battle, but there he was, liberating France,” Nazaryan wrote in the article, headlined “I Was an Enemy of the People.”

It surely was a real thrill for troops to stare down the barrels of strategically placed MG-42 machine guns located in camouflaged nests and bunkers as shells from 88mm guns hit around them.

Nazaryan continued his self-congratulatory piece by repeating The Atlantic’s unsubstantiated reporting from last year, which claimed President Donald Trump called America’s fallen troops in Europe “suckers.” He also praised himself as a reluctant but valiant fighter for truth.

“Journalists were merely going where [Trump] led. This was our Omaha Beach. I, for one, would have rather been in Hawaii,” Nazaryan wrote.

This man has deep issues that need to be addressed by a professional.

Nazaryan did surrender one bit of information that many conservatives can probably agree with him on, though: He misses the “thrill” of Trump.

Not since last summer has the leftist establishment media gone so far down the rabbit hole to connect opposition to the policies of Trump to the tribulations that American forces experienced on D-Day — when thousands of young men paid the ultimate sacrifice to secure beachheads that had been held by fierce and battle-hardened German soldiers along Hitler’s Atlantic wall.

Many of those troops were veteran fighters who had previously been fighting the Soviets on the Eastern Front. Most of these American kids, which is essentially what they were, had never fired a round in combat.

Somehow, they prevailed against the odds against an enemy that knew at some point that an invasion was coming.

Operation Overlord, as it was called, succeeded, and the largest conflict in human history would end in Europe 11 months later. Fighting in the Pacific theater of the war would continue for about another 100 days beyond that.

One thing was certain: Those Americans, with the backing of a nation and its unprecedented logistical operation, were made of the right stuff.

The same cannot be said for this country’s irredeemable establishment media.

How dare these leftist keyboard warriors continue to compare their partisan attacks to the loss of life during the Second World War?

The Washington Times reported last June, on the 76th anniversary of the Normandy invasion, that Washington Post reporter Paul Farhi compared America’s D-Day heroes to the antifa street thugs who were rioting at the time.

“Friend points out on D-Day anniversary that the men who stormed the beaches of Normandy were the true and original antifa,” he said in the tweet, which was later deleted.

Farhi wasn’t the only reporter to compare leftist antifa goons to U.S. troops. NPR’s Mara Liasson posted a similar tweet, and it’s still up as a badge of shame.

These people are unhinged and arrogant.

Looking at Nazaryan’s work, it appears he only fired off a few tweets and published some hit pieces during Trump’s term in office. It doesn’t look like he ever got a case of trench foot or caught any of the shrapnel so many men are still walking around with in their golden years.

Fact check: Nazaryan is full of it, and might be experiencing grandiose delusions.

Joe Biden to Allow 25,000 Migrants Seeking Asylum Into US Amid Covid Pandemic -