Rand Paul Roasts Fauci, Points to Paper That Ties Him to Damning Bit of Research 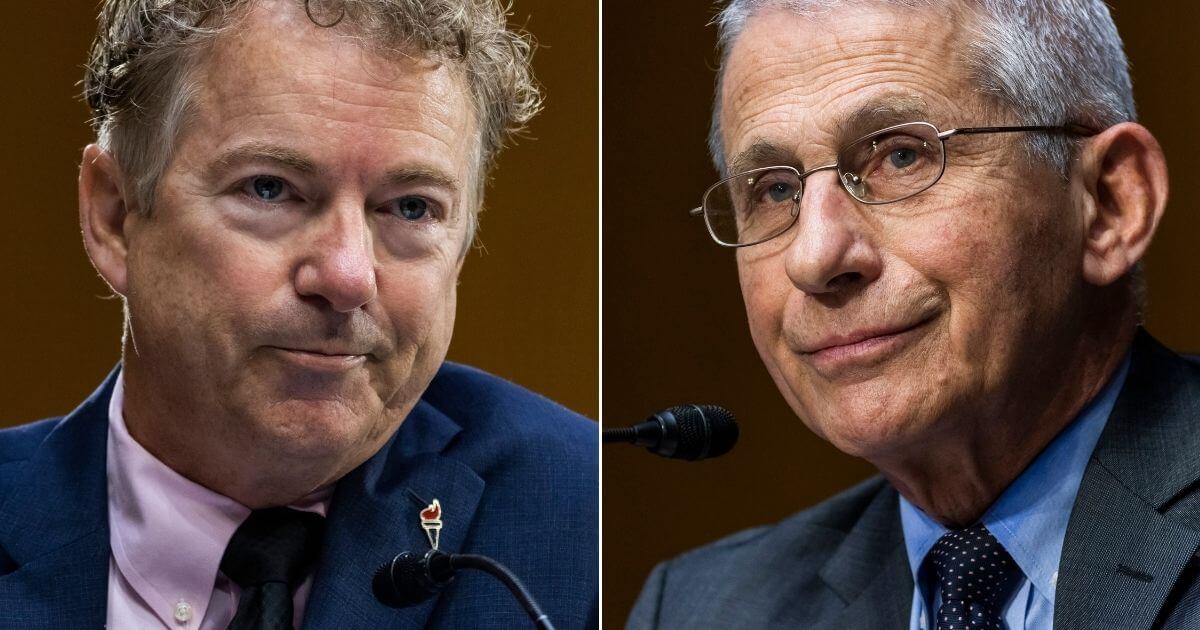 Republican Sen. Rand Paul of Kentucky suggested that White House medical adviser Dr. Anthony Fauci might have helped fund the COVID-19 pandemic by bankrolling China’s Wuhan Institute of Virology, which some scientists say is the likely source of the virus.

Theoretically, that’s what people would do if they wanted to create a bioweapon. Like other countries, the United States does some gain-of-function research.

Paul slammed Fauci for denying that the National Institute of Allergy and Infectious Diseases funded labs that perform gain-of-function research.

The senator said Fauci is blatantly lying because there’s a paper trail going back years showing that the NIAID did indeed bankroll this dangerous research in communist China.

“Dr. Shi [Zhengli], the ‘bat scientist’ — that’s the most famous one from the Wuhan Institute — when she published her papers, which scientists across the board are saying are gain of function, they were juicing up viruses — she gave credit to Dr. Fauci,” Paul said.

“We have this in black and white from a peer-reviewed journal: She said the funding came from Dr. Fauci’s National Institute, NIAID. This is Dr. Fauci’s baby for 40 years. She lists him in the credits.

“He can’t escape this. He did the funding.”

Fauci has been the director of the NIAID since 1984.

The senator said he doesn’t understand why the Wuhan Institute got money from a U.S. agency in the first place when China is a wealthy nation that can easily fund its own research.

Paul also accused the NIH and the World Health Organization of a coverup to hide the origins of the coronavirus.

This is unethical because there are major conflicts of interest when the person who gave the money to the lab accused of creating the coronavirus is then assigned to investigate where the destructive virus originated.

“The person they appointed to investigate the lab from the WHO perspective is the guy who gave the money,” Paul explained. “So NIH gave the money to a group called EcoHealth. The head of EcoHealth – a guy named [Peter] Daszak – they got him to investigate whether Wuhan was doing anything inappropriate in their lab. But if they were, wouldn’t he then be culpable?

“So doesn’t he have a self-interest in smoothing things over? I’m not saying he did cover things up, but you wouldn’t appoint someone who’s in the line of the supply chain, of giving the money to them.”

Shockingly, U.S. tax dollars will be financing the Wuhan Institute of Virology for three more years.

The current director of the NIH is Dr. Francis Collins, who was appointed by former President Barack Obama in 2009. In February, the NIH approved the use of more taxpayer money to fund the Wuhan Institute’s ongoing research until 2024.

This entire episode is so mind-boggling that it sounds like an ominous science-fiction fantasy.

Fauci already has done incalculable damage with his unscientific, flip-flopping coronavirus guidelines, which Democrats and their media lapdogs immediately browbeat Americans to submit to.

But if it turns out that Fauci is also culpable for a pandemic that killed scores of people, decimated the U.S. economy and led to the imposition of restrictions on Americans’ civil liberties, he should not only be fired but vigorously prosecuted.