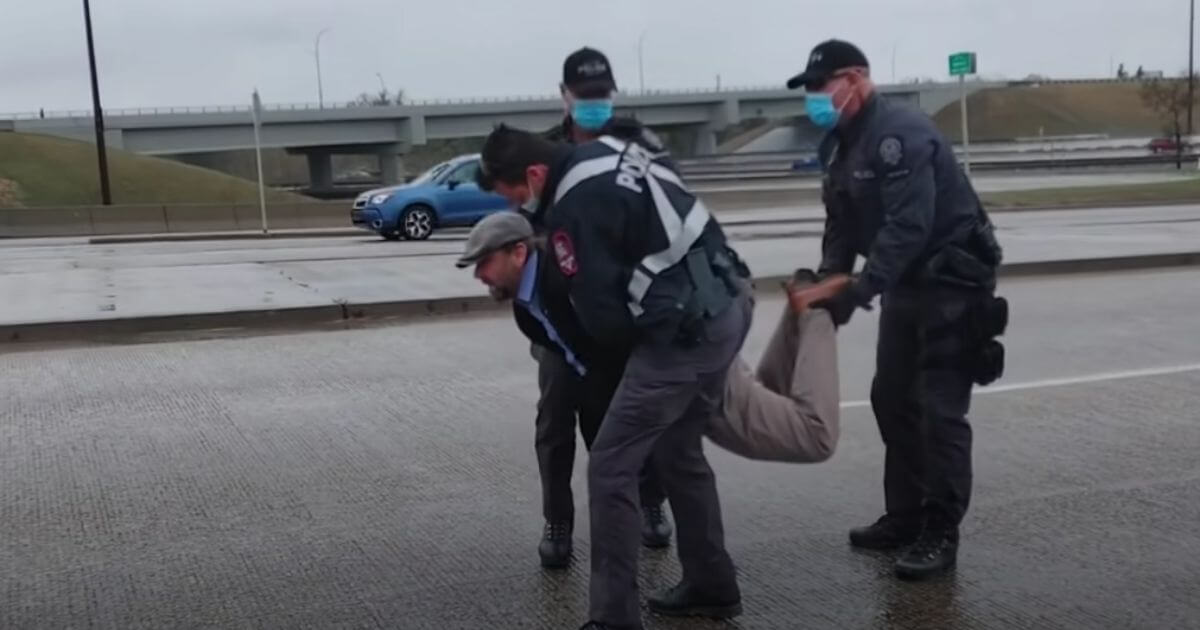 Police in Calgary, Alberta, used newly given powers on Saturday to arrest two street preachers who did not require anyone to wear masks to attend their services.

Artur and Dawid Pawlowski face charges of organizing an illegal in-person gathering, inciting or inviting others to attend an illegal gathering, as well as promoting and attending the gathering, according to CBC.

The arrests were captured on video.

Two days before the arrests, Alberta Health Services had obtained a court order that required protest organizers to obey the province’s COVID-19 restrictions.

“Law enforcement agencies can act immediately under this injunction, without the necessity of Alberta Health Services attendance,” the Alberta Royal Canadian Mounted Police said in a statement.

“There are a variety of ways to enforce this order, including the ability to issue tickets, fines and criminal charges to individuals who are breaking public health orders by organizing and/or attending these events. This can include arrest and removal any person who has notice of this Order and chooses to act in violation of it,” the statement said.

“In the event of non-compliance, the Order provides enforcement powers, including powers of arrest, for those that are organizing, promoting and attending any public gathering where public health orders are not being followed,” the City of Calgary said in a media release.

“We ask those who may be considering organizing or participating in any outdoor events to ensure they are familiar with public health order requirements and to do their part to prevent further spread of the virus.”

Calgary police, in a news release, said the Pawlowskis “acknowledged the injunction, but chose to ignore requirements for social distancing, mask wearing and reduced capacity limits for attendees,” according to Fox News.

For those asking me about for updates on Canadian pastor Artur Pawlowski who was on my show and dared to open up his church for worship, he’s just been put on his knees and handcuffed for it.

An inch away. You’re an inch away from this coming to America. Plan accordingly. https://t.co/AW6cjhnEpk

BREAKING: Less than an hour after Pastor Artur Pawlowski hosted this “illegal” church service in Calgary, he was swarmed by police and arrested. Details to come. We’re crowdfunding his legal defence at https://t.co/bMwAj1iNfP pic.twitter.com/nAgw0CU5dX

Earlier this afternoon, my fellow pastor Artur Pawlowski was arrested in Calgary for the crime of holding a church service, as he does every Saturday morning. Are you awake yet?#standwithGod #freepastorartur pic.twitter.com/UtqwjPzqDc

As a result, the two — who have held gatherings throughout the pandemic and not required attendees to wear masks — were arrested.

Artur Pawlowski faced off with police on Easter weekend, according to Fox News.

“Out of this property immediately until you come back with a warrant,” he said then. “I don’t want to talk to you. I don’t care what you have to say.”

“Get out of this property, Nazis,” Pawlowski said then. “Gestapo is not allowed here.”

Police left then without taking action, but did not do so on their second attempt.

“It is important to understand that law enforcement recognizes people’s desire to participate in faith-based gatherings as well as the right to protest. However, as we find ourselves in the midst of a global pandemic, we all must comply with public health orders in order to ensure everyone’s safety and wellbeing,” Calgary police said in their statement, Fox News reported.