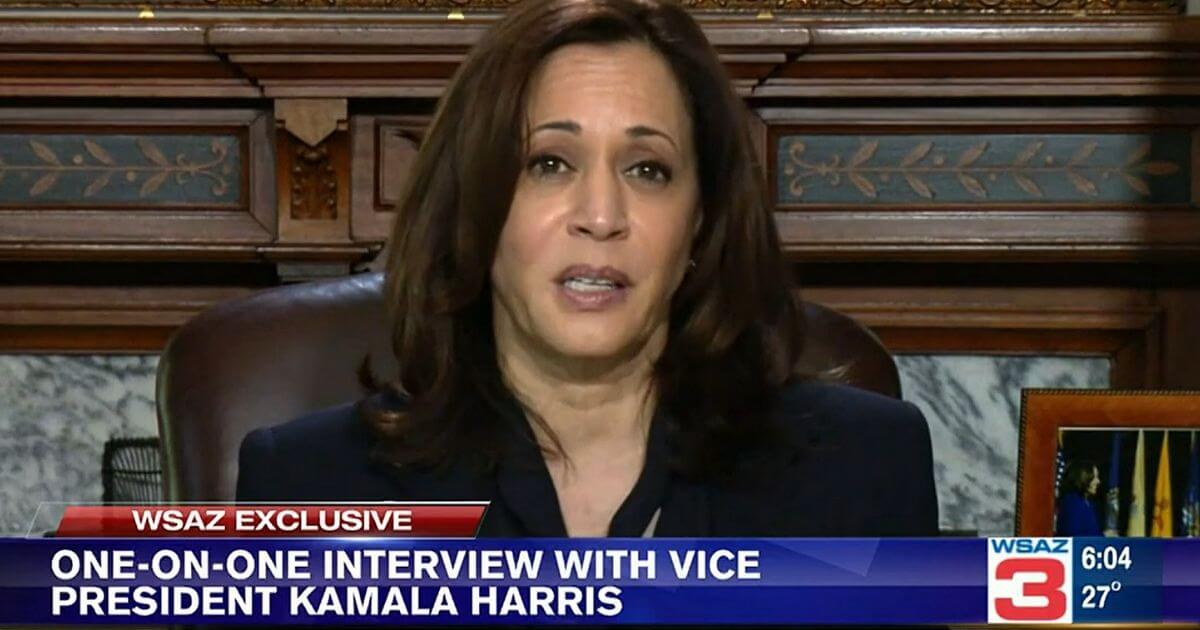 Team Biden is having a tough time with its messaging, especially when it comes to alternatives for energy workers who have lost their high-paying jobs because of the new administration’s war on the fossil fuel industry.

For example, in the video below, John Kerry, who is serving as the special presidential envoy for climate, suggested those workers “make solar panels.”

John Kerry—who flies in private jets, owned a 76-foot yacht and several mansions—has the carbon footprint of a small nation.

Yet he tells energy workers to “make solar panels” when the Biden administration kills their jobs. pic.twitter.com/QhK2FVykxU

If possible, Vice President Kamala Harris sent an even more tone-deaf message during an interview with WSAZ-TV in Huntington, West Virginia, that aired Thursday night.

Her lack of concern for the workers in the coal mining industry whose livelihoods were abruptly lost was impossible to miss. So was her complete lack of familiarity with the topic.

Harris told the outlet that the workers’ skills could be transferred “to what we need to do in terms of dealing with reclaiming abandoned land mines.”

Come on, you know, all those land mines strewn about the countryside in West Virginia.

.@KamalaHarris says there will be job creation around “reclaiming abandoned land mines” in West Virginia.

“All of those skilled workers who are in the coal industry and transferring those skills to what we need to do in terms of dealing with reclaiming abandoned land mines.” pic.twitter.com/xnXP3ra8bN

What better way to win friends in West Virginia? Political commentator Varad Mehta noted on Twitter that this “slip-up” was “sure to cause eye rolls in the state.”

One person responded, “They just keep underestimating her unpopularity, there’s a kind of reverse Trump effect in her polling. Maybe she’s a good politician behind the scenes but public facing, she’s not good.”

They just keep underestimating her unpopularity, there’s a kind of reverse Trump effect in her polling. Maybe she’s a good politician behind the scenes but public facing, she’s not good.

No, she’s really not good.

Except for that one brief moment of glory during a Democratic presidential debate when Harris performed her well-rehearsed takedown of then-rival Joe Biden over busing and segregation, her numbers languished in the low single digits until she was forced to end her campaign.

Harris is unquestionably a bright, accomplished woman, but she is unlikable and appears completely out of touch with ordinary Americans.

Whether she doesn’t know what language to use when discussing mines or she was simply reading the words from a teleprompter, there is a larger point to consider.

This woman is the vice president, and what she says has consequences. The consequences, in this case, make it seem like she has no idea about what the people in the mining industry are facing and that it doesn’t even matter to her.

As the Biden administration continues erasing energy jobs at an alarming rate, it has shown a stunning indifference about the impact this is having on workers and their families.

Democrats used to be known as the party that cared about everyday Americans, while Republicans were painted as beholden to large corporations. These roles have been largely reversed.

Part of this shift can be explained by former President Donald Trump’s embrace of populism. The rest of it can be attributed to the Democrats’ increasing alignment with coastal liberal elites.

Their ebbing concern for working-class Americans became clear after remarks made by then-presidential candidate Barack Obama at a 2008 private fundraiser in San Francisco went public. Referring to voters from “small towns in Pennsylvania” and the Midwest, he famously said, “And it’s not surprising then they get bitter, they cling to guns or religion or antipathy toward people who aren’t like them or anti-immigrant sentiment or anti-trade sentiment as a way to explain their frustrations.”

His chief Democratic opponent in that race, Hillary Clinton, pounced on this statement, telling voters that it telegraphed Obama’s “elitism.”

But that is the direction the party has taken since that time.

Do you think the fossil fuel push will damage the economy?

Although Harris has been known to say or do whatever is necessary to achieve her goals, she was remarkably consistent throughout the campaign about her goal of eliminating the fossil fuel industry. She knows, after all, this is the favored position of the liberal elites.

Biden’s stance tended to waver, depending upon his audience.

Thousands of workers in the fossil fuel industry will lose their jobs in the near future. Thousands already have. The least that Harris and other Biden administration officials can do is to learn something about the industry they’re working so hard to kill. And maybe show some concern, even if they don’t mean it.