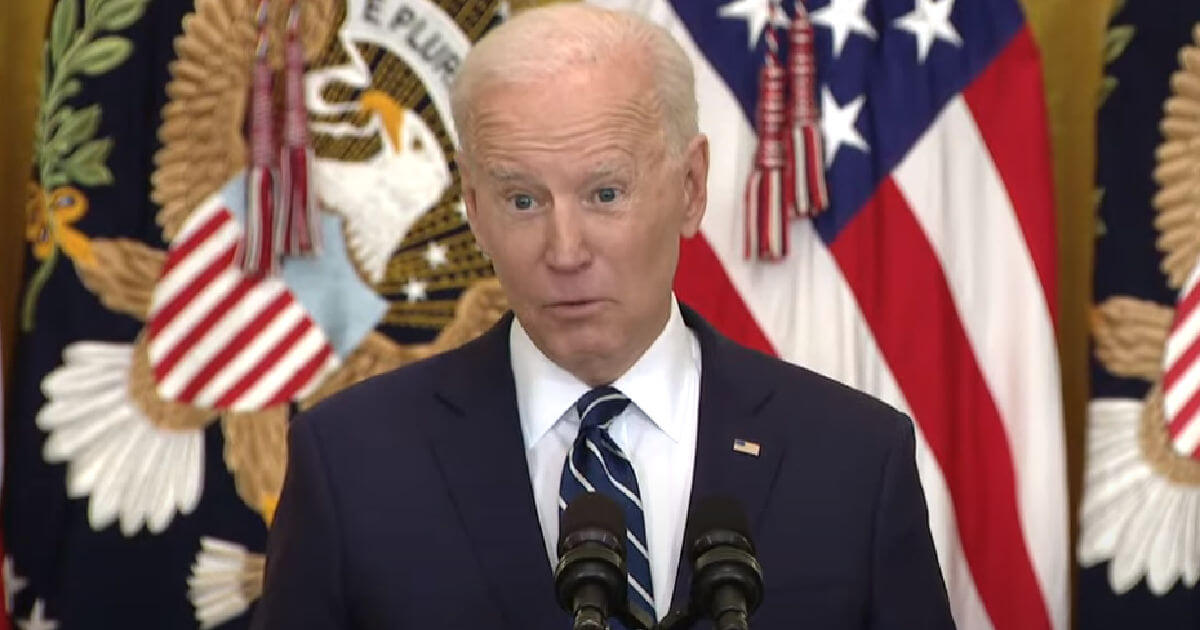 During his first news conference as president, Joe Biden spent more time than he probably wanted to on the border crisis — which was, to hear him spin it, in no way a crisis. And if it was, it happened under Trump’s watch, too.

There were any number of excuses Biden used to explain the surge of migrants at the southern border, none of which had anything to do with his administration’s messaging on immigration. One of the more curious ones was that this surge — which just so happened to begin with the run-up to Biden’s inauguration — was actually a seasonal thing.

That justification began when PBS White House correspondent Yamiche Alcindor told Biden “the perception of you that got you elected as a moral, decent man is the reason why a lot of immigrants are coming to this country and entrusting you with unaccompanied minors.”

Buried within Alcindor’s fawning language — all coming from a woman who was first runner-up to Jim Acosta in the Trump administration media briefing verbal Hunger Games — was a question Biden didn’t actually like. He began by half-sarcastically retorting that “I guess I should be flattered people are coming because I’m the nice guy,” before explaining why this had nothing to do with the fact that no-malarkey-Joe was so nice.

“Truth of the matter is, nothing has changed. As many people came, a 28 percent increase in children to the border in my administration, 31 percent in the last year, in 2019, before the pandemic in the Trump administration. It happens every single solitary year,” Biden said.

“There is a significant increase in the number of people coming to the border in the winter months of January, February, March. It happens every year. In addition to that, there is a — and by the way, does anybody suggest that there was a 31 percent increase under Trump because he was a nice guy and he was doing good things at the border?

WATCH: President Biden says the increase in migrants coming to the southern border “happens every year.”

“There is a significant increase in the number of people coming to the border in the winter months of January, February, March,” he tells @Yamiche. https://t.co/luUMCGUoj7 pic.twitter.com/HxMOsWPFUz

After claiming the Trump administration dismantled programs that would have solved root problems in the Latin American countries where most migrants hail from, Biden again hammered the point home: “I’d like to think it’s because I’m a nice guy, but it’s not. It’s because of what’s happened every year.”

Absolutely. Why aren’t the media reporting this? One Twitter user said she knew:

And? It’s true. And the press who ask this question know it’s true. It’s been said on their own networks again and again. But I guess that doesn’t get people riled up enough for our media.

It could be that. It could also be that it’s a lie. Given that the BBC, a network whose tepid-tea Labour-friendly news coverage isn’t known to get people unnecessarily “riled up” about anything, especially border crises in the United States, fact-checked Biden’s response and found it lacking, I’d go with the latter.

“The US Customs and Border Protection agency releases monthly figures on the number of ‘encounters’ at the south-west land border,” the BBC reported after Biden’s news conference.

In fact, “[t]he highest number in the last few years was in May 2019 when more than 140,000 people were apprehended by the authorities.

“So looking at the figures, the numbers of people apprehended at the border fluctuates greatly — but it doesn’t always appear to go up during the winter months.”

In the 2019 fiscal year, in fact, the numbers were much higher in the hot summer months of June and July than they were in December and January.

We could go on, but the data is here to analyze for yourself. There’s no consistent pattern of illegal migration at the southern border suddenly escalating in December, January, February and March and then tailing off in the summer months.

Whatever speechwriter came up with that fiction should get an award for creative dissembling, but at no point should the media take this seriously as a reason why the border is swamped and the systems to handle it are collapsing under the weight of crisis.

While there are perhaps other issues driving the pattern this winter — two hurricanes hitting Central America, the stresses of the pandemic — there’s one factor we can positively correlate it with. That’s Joe Biden’s presidency.

This was hardly the only falsehood on the border crisis he pushed during the news conference. At one point, he claimed that “the vast majority, the overwhelming majority of people coming to the border and crossing are being sent back.”

The message was clear throughout, whatever the case: Joe Biden wasn’t responsible for the border crisis. It’s the weather. Migrants are getting turned back. His policies weren’t driving the illegal immigration surge. Don’t believe your lying eyes. All of that, obviously, is untrue.

It’s not because he’s a “nice guy” or a “moral, decent man,” though. He promised to change immigration policy. Migrants responded to that change. That cause and effect cannot get any clearer.

While the weather in Central America may have nothing to do with the border crisis, the change in the political weather in the United States is undeniably a driving factor behind it.