Hopes Grow For The Reopening of The Suez Canal, Prospects Boosted by Partial Refloating of Jammed Ship 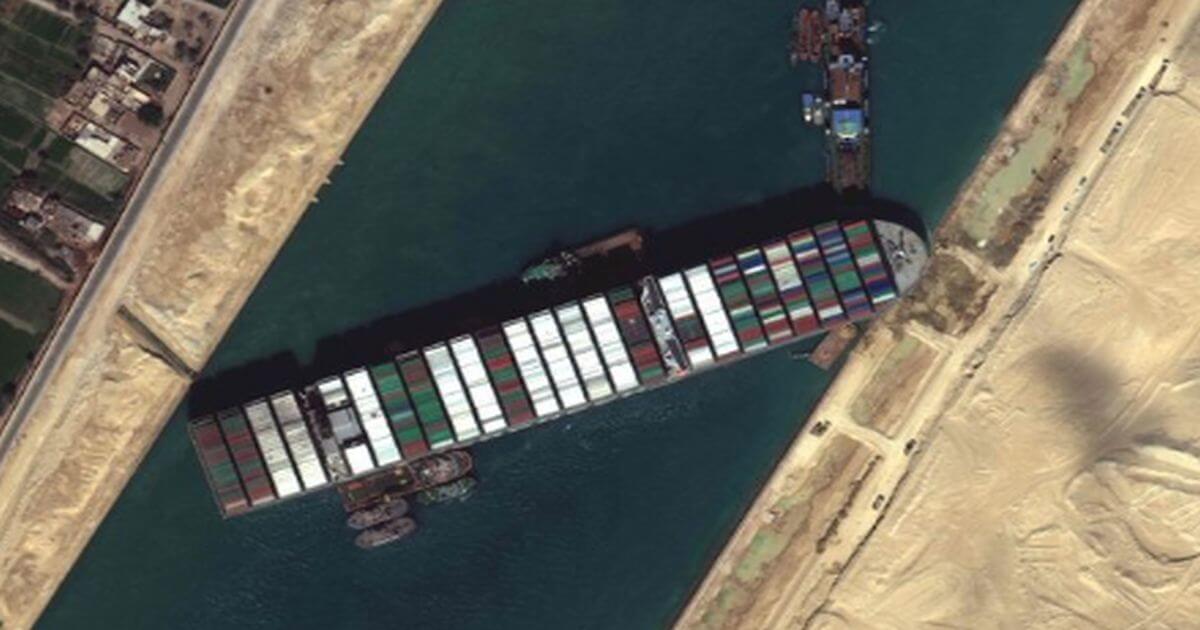 (Reuters) – A huge container ship blocking Egypt’s Suez Canal for nearly a week has been partially refloated, raising hopes that the busy waterway will soon be reopened for a big backlog of ships.

The 400-meter (430-yard) long Ever Given became jammed diagonally across a southern section of the canal in high winds early last Tuesday, halting traffic on the shortest shipping route between Europe and Asia.

The Suez Canal Authority (SCA) said on Monday the vessel had been mostly straightened along the eastern bank of the canal and further tugging operations would resume once the tide rose later in the day.

After dredging and excavation over the weekend, rescue workers from the SCA and a team from Dutch firm Smit Salvage had been trying to free the ship using tug boats in the early hours of Monday, two marine and shipping sources said.

Around midday, tugs could be seen maneuvering around the ship, some with tow lines attached, churning the water beneath them.

Marine traffic through the canal will restart once the ship is directed to the lakes area – a wider section of the canal, the SCA said.

The SCA has said it can accelerate convoys through the canal once the Ever Given is freed. “We will not waste one second,” Rabie told Egyptian state television.

He said it could take from two-and-a-half to three days to clear the backlog, and a canal source said more than 100 ships would be able to enter the channel daily. Shipping group Maersk said the knock-on disruptions to global shipping could take weeks or months to unravel.

“We have movement, which is good news. But I wouldn’t say it’s a piece of cake now,” Peter Berdowski, the CEO of Smit Salvage’s parent company Boskalis, told Dutch public radio.

High pressure water would be injected under the bow of the ship, which is still stuck, to remove sand and clay but if that was unsuccessful, containers might have to be removed from the ship, which would cause a considerable delay, he said.

A source involved in the salvage operation told Reuters on Monday they were re-ballasting the ship and expected that with a favorable tide, cargo would not need to be removed.

“The good news is she’s moved. But she is still stuck in the mud. A second large anchor-handling tug will arrive this morning. Hopefully they will be able to pull her free.”

Video footage posted on social media showed the ship had swung around, opening space in the canal. Other footage, filmed at dawn, included celebratory cheering and horns sounding from the tugs around the ship.

About 15% of world shipping traffic transits the Suez Canal, which is an important source of foreign currency revenue for Egypt. The stoppage is costing the canal $14-$15 million a day.

Egyptian President Abdel Fattah al-Sisi, who had not publicly commented on the blockage, said Egypt had ended the crisis and assured resumption of trade through the canal.

Maersk was among shippers rerouting cargoes around the Cape of Good Hope, adding up to two weeks to journeys and extra fuel costs.

In Suez Canal, Stuck Ship Is a Warning About Excessive Globalization https://t.co/KNwi9zg5lS

The giant container ship blocking the Suez Canal has been partially refloated — but it is still stuck and blocking traffic.

About 370 ships are waiting to cross the trade route, blocking up to $10B in cargo per day, and it may take days to clear the backlog. pic.twitter.com/y3297MnkzN

In Suez Canal, Stuck Ship Is a Warning About Excessive Globalization https://t.co/KNwi9zg5lS