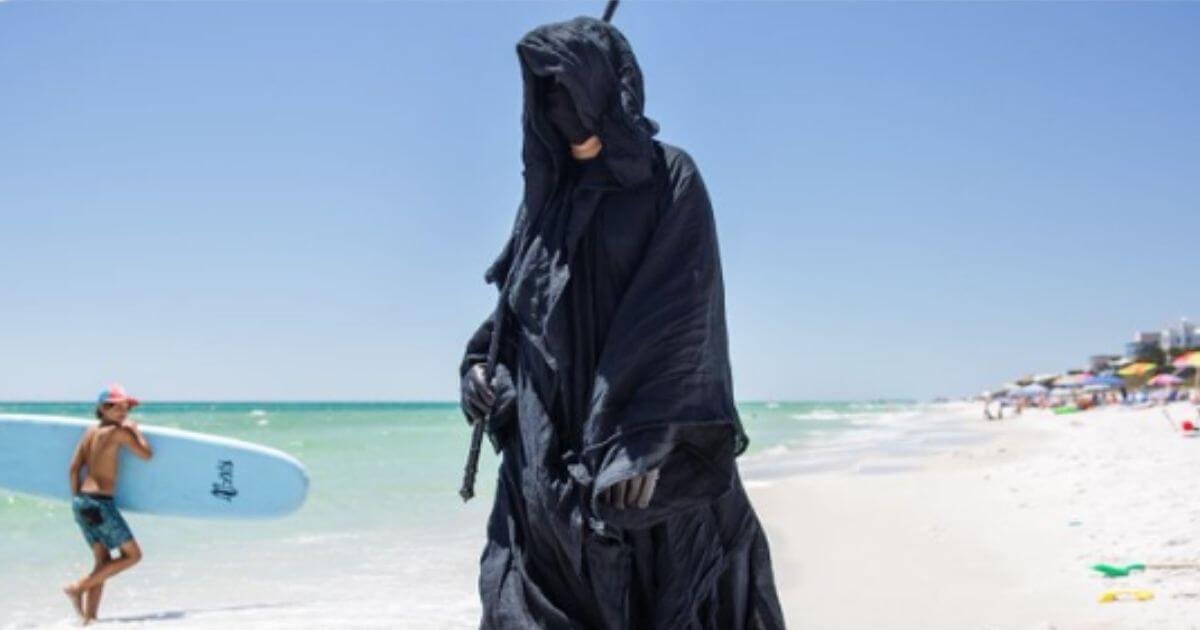 Anyone remember Daniel Uhlfelder’s antics during the early days of the COVID-19 pandemic?

If you don’t, the Washington Examiner explained that Uhlfelder went viral after dressing up as the Grim Reaper and scolding innocent beachgoers for daring to leave their homes — a cardinal sin among those who turn reasonable social distancing practices into a cult-like religion.

Unfortunately for those of us who live in reality, Uhlfelder has never gotten the hint that his fifteen minutes of fame have expired.

TRENDING: Southern Lawmakers in Multiple States Tell Leftists They’re Not Putting Up With Any More Anti-Americanism

The Washington Examiner said that Uhlfelder was paraded around as a hero by establishment media networks like CNN, even though he ignored the social distancing protocols he championed during the George Floyd protests.

Thankfully, the progressive agitator finally appears to have bitten off more than he can chew.

The Hill reported in April that Uhlfelder sued Florida Gov. Ron DeSantis in an effort to close the state’s beaches, but it was clear from day one that the lawsuit was for ideological rather than legal reasons.

Uhlfelder himself essentially admitted this in an Op-Ed for the Gainesville Sun, in which he wrote, “The governor’s devotion to [former President Donald Trump] and his misguided concept of economic recovery — a recovery that will never happen fully until we get this pandemic under control — have not only hurt Floridians, but also made our state look foolish.”

However, the courts aren’t taking to Uhlfelder’s lawsuit very kindly.

“[Uhlfelder] and his counsel knew or should have known that their appeal was not rooted in the law and that their briefs merely stated their opinion without relying on good-faith, reasonably arguable citations to any legal authority for reversal.”

Furthermore, the court noted that Uhlfelder’s legal “brief expressed repeated personal attacks, stating for example that the Governor ‘has reverted to his complete disregard for the lives of his constituents’ and that he ‘has no regard for their safety’” — attacks that were not “supported by citations to evidence or factual findings by the trial court in the record.”

Finally, delivering its biggest smackdown, the court forwarded its opinion to The Florida Bar association “for its consideration of whether Appellant and his counsel violated the Rules Regulating the Florida Bar.”

The court encouraged the Bar “to take appropriate action to ensure that Appellant and his counsel understand their ethical obligations and proper roles as officers of the court,” as well as to “require [Uhlfelder] and his counsel to undertake additional educational training the Bar may deem appropriate to ensure that Appellant and counsel comply with their ethical and professionalism obligations.”

It’s always satisfying to see an agitator discover that they are not invincible and that their actions can have serious consequences.

Sadly, Uhlfelder appears to have learned nothing. He spent the day of the ruling complaining about the Super Bowl, Trump and Missouri Sen. Josh Hawley’s wife. News about the decision was noticeably absent:

Tampa friends. My friend has a banner flying over Super Bowl Stadium right now that says:

We need ground shots and videos if you got em’

Hawley’s wife files complaint against organizer of protest outside their home https://t.co/FjI6ywHQq9

Someday, the “Grim Reaper” will get his comeuppance. Maybe this round of hot water will be the start of something bigger.

Either way, it would nice if the establishment media would stop fawning over obvious attention-seekers. It does nothing but creates social media monsters while hampering legitimate public health efforts.