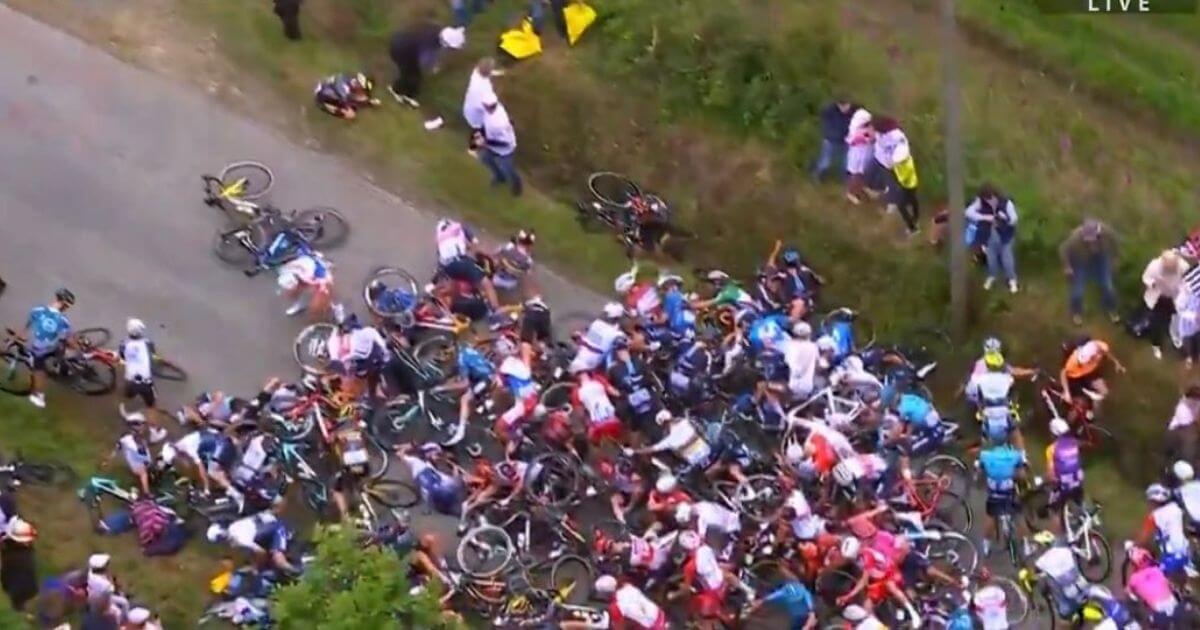 Chaos reigned at the Tour de France Saturday after a fan holding a sign triggered a massive crash at the world-famous bicycle race.

The incident took place along the first stage of the race, when a woman held out a sign reading, ‘Allez Opi-Omi,” which is a term of endearment to one’s grandparents.

As she waved the sign for TV cameras, she had her back to a pack of riders and struck German rider Tony Martin, who was riding with the Jumbo-Visma team.

Martin and about half of the riders went down in the massive pileup that followed as one bike crashed into another in the closely packed group.

“I saw the lady, I saw the sign but at the last moment she turned the sign into the road so for me there was no time to react,” Martin said, according to Cycling News.

“The move was pretty unexpected. I still can’t understand how people can do things like that. We’re here to race our bikes; it’s not a circus,” he said.

“It all happened very quickly; suddenly almost the entire team was on the ground. Many spectators behave respectfully, but unfortunately not this one,” Martin said.

Martin on Sunday said he was not seriously injured in his fall.

“Actually I don’t feel too bad. The night was OK. I have no pain now on the bike. So I have to see from day-to-day but I hope that I can recover,” he said.

“The mechanics had a long night. There were a lot of bikes that were completely broken. The doctors had a lot of things to do, too, and in the next days with changing bandages. It’s not a nice start to the Tour de France but we get used to it,” he said.

As a result of the mass crash, rider Jasha Sütterlin was treated at a hospital for an injured hand and later released.

Eight other riders received treatment from the race’s medical staff.

According to CNN, Sütterlin was among three riders who withdrew from the race due to the crash.

The person who caused the crash has not been identified but is being sought by police.

The Landerneau authorities are investigating what has been termed the “manifestly deliberate violation of an obligation of safety or prudence.”

Bradley Wiggins, the 2012 Tour de France winner said fans are “part and parcel of the spectacle of the Tour de France. And this year, in particular, being able to come back onto the route and watch it. I don’t know how you police it.”

“We are suing this woman who behaved so badly,” he said. according to Cycling News.

“We are doing this so that the tiny minority of people who do this don’t spoil the show for everyone.”

“CNN is neither truthful nor honest”...Republican Mo Brooks Confronted by CNN's Jim Acosta On The Street