BREAKING, Mitch McConnell Warns About Legislation That Could Allow Dems to ‘Win Elections in Perpetuity’ 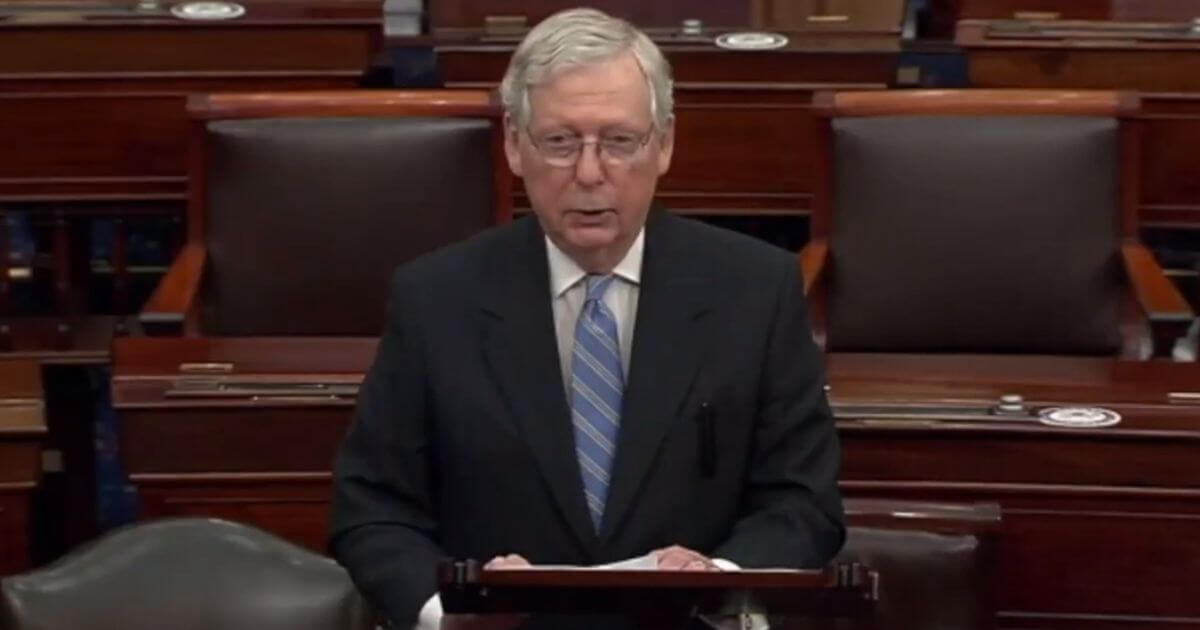 Senate Minority Leader Mitch McConnell warned that Democrats are trying to use their majorities in the House and the Senate to give themselves a political advantage in every future election.

The Kentucky Republican criticized the Democrats’ so-called For the People Act, HR 1 and S1, in an interview Tuesday on the conservative “Ruthless” podcast.

The legislation would overhaul the American voting system. Among other things, it would force states to promote mail-in voting, allow convicted felons to vote, automatically register voters and allow same-day registration. It also would change the makeup of the Federal Election Commission from six members (three from each party) to five.

“They want to change the system to benefit themselves, and they want to have, instead of a referee, they want the FEC to be a prosecutor,” McConnell said.

“So this is not about anything other than trying to help the Democrats win elections in perpetuity.”

Democrats have touted the legislation as an effort to increase access to the polls and end corruption. House Speaker Nancy Pelosi declared that HR 1 removes “obstacles to participation” in elections and “restores the people’s faith that government will work for the people and not the special interests.”

The bill passed the House of Representatives earlier this month without any Republican support.

Meanwhile, the Senate Rules and Administration Committee will hold a hearing Wednesday on its version of the legislation.

Senate Majority Leader Chuck Schumer said in a speech on the Senate floor last week that SR 1 “would combat all of these voter suppression efforts by restoring critical parts of the Voting Rights Act.”

The New York Democrat called it a “bill that would make it easier — not harder — to vote by automatically registering American voters when they get a driver’s license.”

McConnell pushed back on Schumer’s claims, pointing out “we had record turnouts last year.”

“So this is not to drive up turnout. Turnout’s already driven up,” he said.

“It’s to take over the Federal Election Commission so it can be a prosecutor. It’s to provide public funding for elections. It’s to provide the same-day registration, which I just looked at a survey that said 81 percent of the Amerian people are concerned about something like that leading to vote fraud.

“It’s about eliminating voter ID at the polls, which the American people support 72-25. It also mandates what’s called ballot harvesting, that is, going around and picking up ballots of other people. The American people, when that’s explained to them, oppose it 83-16.”

On the podcast, McConnell also railed against the Democrats’ efforts to grant statehood to Puerto Rico and Washington, D.C., and to remove the legislative filibuster.

“These folks are not interested in compromise,” the senator said.

“They’re interested in passing all of their bills to remake America, in spite of the mandate that they did not get last year, as rapidly as possible. And the filibuster is what prevents that. So it looks like we’re down to two brave Democrats — Joe Manchin of West Virginia and Kyrsten Sinema of Arizona — preserving the institution.”

Breaking: The Biden Admin is No More; WH Says It Will Now Be Officially Called The Biden-Harris Administration