As John Kerry Jets Across Globe on Climate Tour, His Family Takes a Private Airplane to Vacation in Idaho 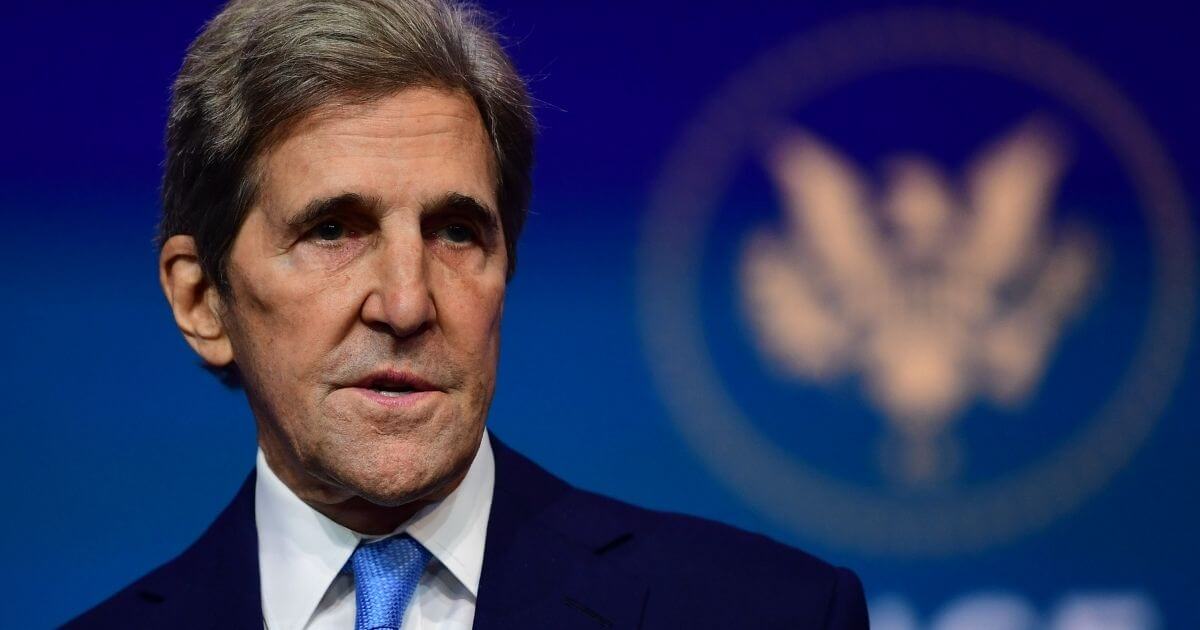 Climate czar John Kerry is lecturing the world about climate change even as his family is punching its own hole in the ozone layer.

The former secretary of state began his international trip April 1, bringing his “consultations on increasing climate ambition” from Abu Dhabi to Dhaka to prime the nations for their climate scolding from Biden.

The Washington Post reported that while speaking on the subject in New Dehli Thursday, Kerry stressed the importance of nations working together to solve the climate change crisis or risk facing a “mutual suicide pact across the planet” — strong words from a man not even willing to forgo his own conveniences.

It’s not clear why the plane was flying there this time, but for decades, Kerry and his ketchup-heiress wife Teresa Heinz have vacationed in the nearby resort town of Sun Valley.

Private jets emit 40 times more carbon emissions per passenger than commercial jets, so flying with the rest of the rabble would surely be a sacrifice worth making if he believed his own rhetoric.

But Kerry already made it clear that he’s too important for commercial flight.

After taking a private aircraft to Iceland to accept an award for his leadership on climate change in 2019, he told a reporter there it was the “only choice for somebody like me who is traveling the world to win this battle.”

He has paid lip service to the idea of offsetting his carbon emissions, but it’s unknown exactly how he planned to do that or if he ever has.

It could also be that it’s just too hard for Kerry to believe his own nonsense after he made a fool of himself with a dire prediction that has proven to be total bunk.

“You have sea ice which is melting at a rate that the Arctic Ocean now increasingly is exposed,” Kerry said in June 2009.

“In five years, scientists predict we will have the first ice-free Arctic summer, that exposes more ocean to sunlight.”

“Ocean is dark, it consumes more of the heat from the sunlight, which then accelerates the rate of the melting and warming rather than the ice sheet and the snow that used to reflect it back up into the atmosphere,” Kerry added.

Kerry and his ilk are fond of making sweeping, onerous regulations for the rest of us based on these kinds of apocalyptic predictions.

They use them as justification to do things like tinker with the military and cut people’s power — all while living unbelievably lavish, fossil-fuel guzzling, jet-setting lifestyles.

If these people really believed their own rhetoric, they would live like it.

Instead, Kerry’s jet will continue to spew carbon into the air — ostensibly damaging the ozone layer and warming the planet — while he’s half a world away lecturing foreign nations about their own energy policies.

And he will continue to get away with it because the establishment media is invested in the radical climate agenda.

Leftists in the media and government alike cling to the issue because the solutions conveniently involve redistribution of wealth, population control, suffocatingly large government, destruction of the fossil fuel industry and a whole host of other leftist policies.

Kerry is just the latest hypocrite to take up the mantle of climate activism and destroying living standards while making none of the changes to his own lifestyle  — and that makes what he’s spewing is more harmful than anything coming from his private jet.