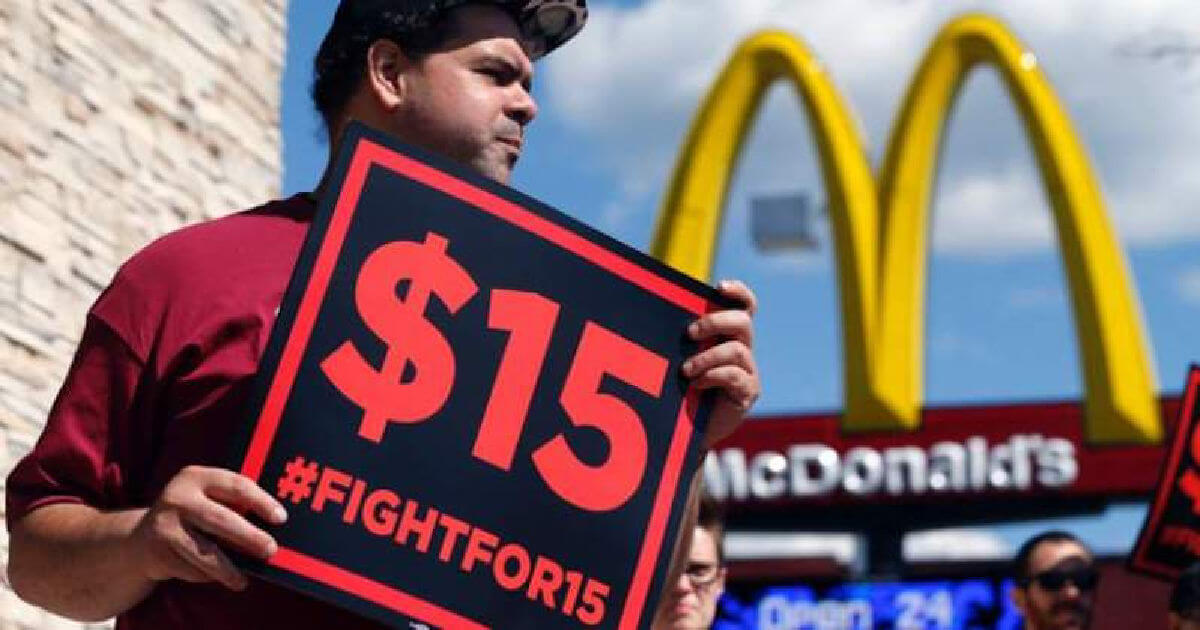 Increasing the federal minimum wage to $15 may be sold as a way to lift Americans out of poverty, but really it’s just another attempt to break the economy and spread the misery — just like every other Democratic plan.

But according to Rachel Greszler, a research fellow in economics at the Heritage Foundation, a minimum wage hike would force families already struggling to pay more for daycare.

The minimum wage increase is especially burdensome because the child care industry is highly regulated and not easily automated, leaving few options for reducing overhead expenses.

The higher cost would be passed down to parents and ratchet up the share of income paid for daycare, which for some families would top out at 40 percent of their overall budget, according to Grezler.

The research fellow asserted that many in two-parent households would opt to have one parent stay home instead, exacerbating another problem Democrats supposedly care about.

“To the extent that women would be more likely to stay home than men,” Greszler theorized, “this could widen gender-based differences in the labor market.”

According to National Public Radio, women were four times as likely as men to drop out of the workforce to deal with the demands of caring for children when schools and care facilities were closed due to the COVID-19 pandemic.

If the goal is to have as many women working outside the home as possible, this prospect is especially bleak when combined with the possible hit to lifetime wages for women.

Traditionally-minded conservatives understand that mothers staying home with their children is the preferable situation whenever possible, but it shouldn’t be a choice forced by lousy government policy.

For single mothers or families who simply cannot afford for a wage earner to quit, Greszler said desperate parents could “turn to non-licensed, typically illegal, childcare.”

Although a very likely and sobering possibility, that argument is only compelling for the left when embedded in the myth of women forced into coat-hanger abortions.

Increased expenses for child care is just one of the many problems experts have predicted if employers are arbitrarily forced to pay more for unskilled labor.

The nonpartisan Congressional Budget Office has already projected a net loss of 1.4 million jobs in just four years for the wage hike.

Small business advocacy groups have warned that while big-box retailers and chain restaurants could absorb the costs, the real damage will be to mom and pop shops that epitomize the “little guys” Democrats claim to fight for — even as they treat killing small businesses simply as collateral damage.

Increasing the mandatory wage paid to unskilled workers also reduces the number of entry-level jobs for young or immigrant workers, contributing to their unemployment and robbing those workers of valuable future opportunities.

– Me, a small business owner for over 30 years

The House will pass President Biden’s Covid relief bill on Friday, including $15 minimum wage. Help is on the way. Whether Republicans like it or not.

Two-thirds of Americans support raising the minimum wage to $15 an hour. So why hasn’t it budged? Follow the money: giant corporations want to keep raking in huge profits, while their workers hang on by their fingernails. It’s time for an economy that works for working people.

You cannot tell me that raising the minimum wage to $15 an hour is a radical idea. pic.twitter.com/sGw7xhuzhj

If the true aim is to help the middle and lower classes, implementing a policy that will kill small businesses, increase the cost of child care and kill jobs is not the way to do it.

But handouts and meager monetary increases are the gateway drugs that Democrats freely give away to get the population hooked on socialism.

They know that the media will never hold them accountable when these predictions come true.

So they can claim that mean old Republicans are withholding help to protect Big Business and that Democrats have once again come to the rescue.

The dirty little secret is that these supposedly unintended consequences will give the Democrats what they really wanted all along — as many people impoverished and dependent on the government as possible.

Rep Andy Biggs Rips Into Dem Lawmakers for “Turning a blind eye” To BLM/Antifa Rioters While They Burned and Destroyed USPS Offices, Trucks