GOP Rep Says Biden Has Been ‘Derelict In His Duty, Calls For Joe’s Impeachment: “I have called for Joe Biden to answer to the American people in impeachment hearings” 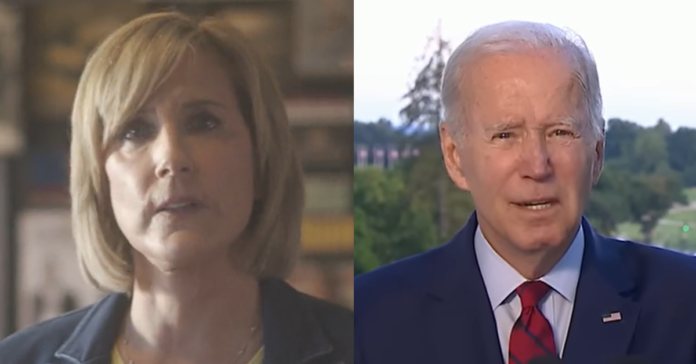 New York Republican Rep. Claudia Tenney called for President Joe Biden to be impeached from office in a new viral video. She says:

“I see this guy as a talentless, career politician and completely derelict in his duty, which is why I’ve called for him to be impeached. One of the things about the Republicans that is kind of frustrating at times is, we don’t fight.

“We have to fight every single day, right now. I stand up to the status quo in both parties, I have a core set of principles. Can we preserve this Republic? It is all on the line. It’s not easy to fight the fight that patriots fight, but it’s worth it.

“Whether it is Joe Biden’s dereliction of duty at the Southern Border or his disastrous retreat in Afghanistan, I have called for Joe Biden to answer to the American people in impeachment hearings.

“I will not stand by while Biden and Pelosi trample on our constitution to push their far-left agenda.

“I look forward to working with a Republican House Majority next Congress to impeach Biden and hold his administration accountable for their numerous failures,” Tenney says.

Sen. Bill Haggerty slammed Biden today on Fox Business. He said of Biden’s plan to hire more IRS agents, “Clearly, they want all of our data. This is just like the Chinese Communist Party.

“They want to be able to snoop and look into every aspect of our life.

“And that amount of data creates a tremendous amount of reporting overhead.

“It’s going to increase costs for businesses that have to make all these reports.

“It’s going to make it next to impossible for small businesses and entrepreneurs to deal with.

“They’re so out of touch with the economy and out of touch with reality that they’re just going to continue to plow through because this generates fictitious numbers that they use here in the Congress to justify even more massive spending,” he said.

The loss of Jackie Walorski and her two exceptional team members Emma and Zach, is not only a devastating loss for their families, and the people of Indiana, it’s a loss for America. https://t.co/s73i7bygBQ

We will not stand by while Biden and Pelosi trample on our constitution to push their far-left agenda.

We Have Video of Anthem-Hater Brittney Griner Finding Out Her Prison Sentence... Russian Judge Was Harsh