Lauren Boebert Fires Back At Kevin Costner, Lands Knockout Blow: “How did Kevin Costner go from Dancing with Wolves to slumming with RINOs?” 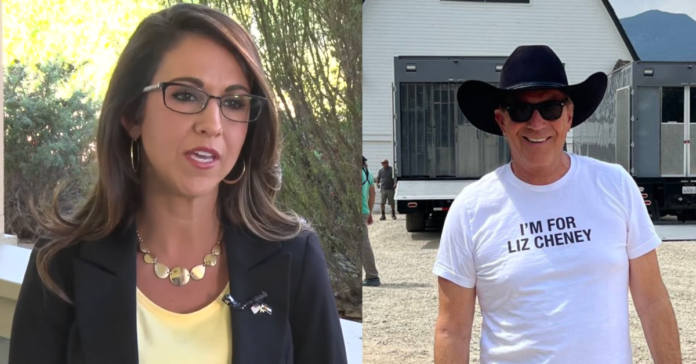 GOP Rep Liz Cheney called in the Hollywood big guns to save her failing effort to keep her seat in Congress. Earlier she tried to convince Dem voters to switch parties for the primary but with that in doubt, she turned to Kevin Costner.

Cheney landed an endorsement from Yellowstone star Kevin Costner that she promoted it on social media captioning a picture of Kevin wearing a shirt that said: “I’m for Liz Cheney” with, “Real men put country over party.”

Costner, who has a history of supporting Dem candidates, said in 2020 about his politics: “I vote for who I think has the best interests of the country and how we sit in the world. The Democratic Party doesn’t represent everything that I think, and neither does the Republican Party right now — at all. So, I find it too limiting.”

“How did Kevin Costner go from Dancing with Wolves to slumming with RINOs?”

Ouch. And it will get worse for Kevin because Liz is polling terribly and even CNN could barely find a Cheney voter in Wyoming.

CNN’s Randi Kaye did a segment where she asked Wyoming voters about the race. Most denounced Cheney.

How did Kevin Costner go from Dancing with Wolves to slumming with RINOs?

Kaye said: “At Frontier Days in Cheyenne, Wyoming, we found plenty of Republican voters bucking the Cheney name, and vowing not to support Congresswoman Liz Cheney for a fourth term.”

“Are you planning to vote for Liz Cheney?” Kaye asked voter Sharon Tuggle who said, “Hell no, she’s done us dirty. Look at how she’s done Trump. She is supposed to be supporting him. She is a Republican for crying out loud.”