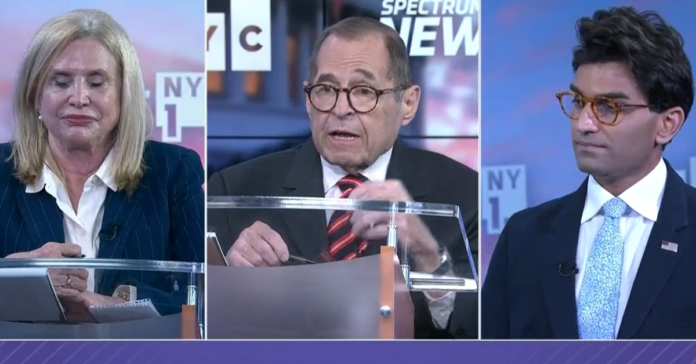 The Dems in New York screwed New York Rep Jerry Nadler with redistricting. He is in a tough race for the first time in a long while and Nadler is not handling it well.

He botched a critical debate last night turning in a shaky performance when he could least afford it. Manhattan Dem Reps. Carolyn Maloney and Nadler have been in office since 1992 and are facing off in a primary after the once every ten-year redistricting process.

Suraj Patel, who worked for Barack Obama, is the other challenger and he called out Nadler and Maloney for being swamp creatures.

“With seniority comes clout and the ability to get things done,” Nadler said. “That’s the way Congress works.”

“Nineteen-nineties Democrats have lost about every major battle to Mitch McConnell and the Republicans,” said Patel calling for a change.

Nadler tried to fend off his challenger at one point reminding voters that, “I’ve impeached Bush twice.”

He meant Trump and it went downhill from there for Nadler.

Nadler sat down during the entire 90 minute session while Maloney and Patel stood at their lecterns.

Nadler had many other verbal stumbles throughout the debate and at one point when the moderators offered him a chance to respond since his name had been brought up by an opponent, he seemed stunned and had nothing to say.

At one point, WNYC moderator Brigid Bergin asked Nadler about the importance of seniority and how he and Maloney differed on policies, two related but different questions.

Nadler answered that seniority is important if used effectively, but forget about the Maloney comparison.

And Nader says too early to say. https://t.co/CQwy6xGsQ6

Lauren Boebert Fires Back At Kevin Costner, Lands Knockout Blow: “How did Kevin Costner go from Dancing with Wolves to slumming with RINOs?”