Ron DeSantis Tells Joy Behar To Beat It, Turns Down Request To Appear On The View With Scathing Response: “We will pass on this offer” 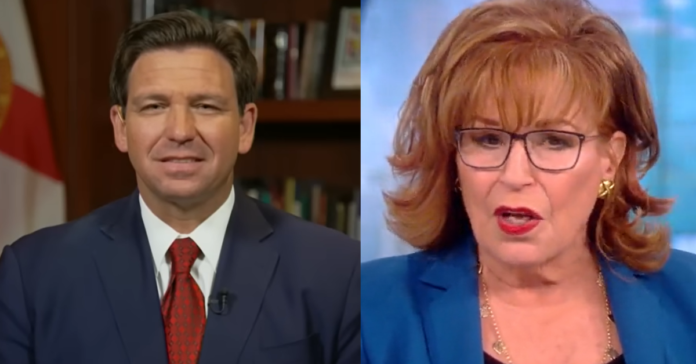 Florida Gov. Ron DeSantis’ office told Joy Behar, Whoopi Goldberg, and the rest of ABC News’ “The View” to go pound sand after the show asked the Republican governor to appear as a guest.

“Thanks for the invite. I understand that you are sending this request on behalf of your team. But are the hosts of the View really interested in hearing from Governor DeSantis about all of the important work he is doing on behalf of Floridians to protect their health and livelihoods, to stand up for parents and children, and to defend freedom?”

“Which of the below statements from the hosts of the View do you recommend our team consider when deciding if the interview will be a genuine pursuit of truth?

‘You’re just short of calling DeSantis a negligent homicidal sociopath because that’s what he is what is he doing he’s risking the lives of children, children’s parents their grandparents anyone they may come in contact with so he can appeal to his white supremacist base, so he can continue his career and get re-elected.’

‘Death-Santis I think he’s a fascist and a bigot.”

“Anna Navarro April 2022:  ‘Anti-black it’s anti-gay it’s anti-LGBTQ community and for some reason the Republican base responds to it.

‘It’s what happens in Venezuela.

‘It’s what happens in Nicaragua.’

“We will pass on this offer.

“Also please note- we don’t coordinate appearances or events of a political nature from the official office. Our role is to serve the people of Florida,” he said.

Here’s our response to @TheView: pic.twitter.com/dyLNl9qexH

DeSantis press team reveals ‘The View’ reached out for a guest appearance https://t.co/Wjpffmqjy3

Last week Tina Descovich, Co-Founder of @Moms4Liberty, shared that PayPal locked their account and withheld funds with no warning or justification.

Days after our event, their funds were released.

There's One Very Big Problem With Joe's Al-Qaida Assassination, And Our Media Isn't Mentioning it