Joy Behar Embarrasses Herself On National Television, Says Joe Biden Is Like Liam Neeson In Taken 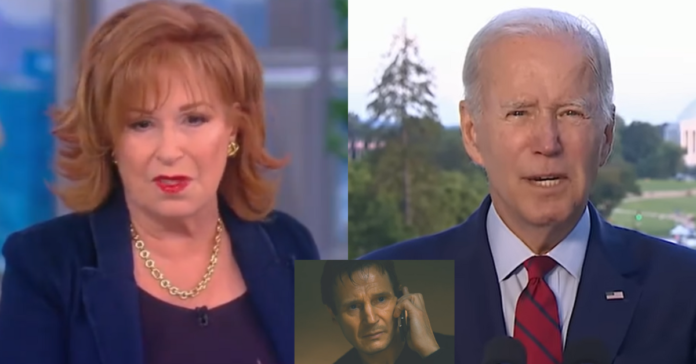 Joy Behar embarrassed herself on Tuesday’s broadcast of ABC’s “The View” saying that President Joe Biden is like the action movie star Liam Neeson in the 2008 action film Taken.

Behar was talking about the killing of al Qaeda leader Ayman al-Zawahiri in a drone strike in Afghanistan yesterday when she made the humiliating comment. During his speech Monday, Biden said:

“Justice has been delivered, and this terrorist leader is no more. People around the world no longer need to fear the vicious and determined killer. The United States continues to demonstrate our resolve and our capacity to defend the American people against those who seek to do us harm.

“We make it clear again tonight that no matter how long it takes, no matter where you hide if you are a threat to our people, the United States will find you and take you out.”

Behar gushed, “He’s like Liam Neeson. I will find you, and I will kill you.”

“He took a lot of heat for pulling troops out of Afghanistan.

“I mean, does this not show that, you know, with drones, we apparently don’t need boots on the ground to target terrorists?”

Behar said, “I hope the irony is not lost on us that while Biden was taking out this terrorist from 9/11, Trump was playing golf with some of the with Saudi Arabians who are behind the 9/11 attack.

“I think that’s an important contrast to make.”

Below is a transcript of Biden’s full speech

My fellow Americans, on Saturday, at my direction, the United States successfully concluded an airstrike in Kabul, Afghanistan, that killed the emir of al Qaeda, Ayman al-Zawahiri.

You know, al-Zawahiri was bin Laden’s leader.  He was with him all the — the whole time.  He was his number-two man, his deputy at the time of the terrorist attack of 9/11.  He was deeply involved in the planning of 9/11, one of the most responsible for the attacks that murdered 2,977 people on American soil.

For decades, he was a mastermind behind attacks against Americans, including the bombing of the USS Cole in 2000, which killed 17 American sailors and wounded dozens more.

He played a key role — a key role in the bombing of U.S. embassies in Kenya and Tanzania, killing 224 and wounding over 4,500 others.

He carved a trail of murder and violence against American citizens, American service members, American diplomats, and American interests.  And since the United States delivered justice to bin Laden 11 years ago, Zawahiri has been a leader of al Qaeda — the leader.

“A Democratic president did this. Not a Republican. Just like a democratic president took out Osama bin Laden.”
Whoopi Goldberg seems to suggest Republicans aren’t supporters of killing terrorist leaders.
Joy Behar claims Biden is like Liam Neeson in the Taken series. pic.twitter.com/fD3Pp0QmN3

From hiding, he coordinated al Qaeda’s branches and all around the world — including setting priorities, for providing operational guidance that called for and inspired attacks against U.S. targets.

He made videos, including in recent weeks, calling for his followers to attack the United States and our allies.

Now justice has been delivered, and this terrorist leader is no more.

People around the world no longer need to fear the vicious and determined killer.  The United States continues to demonstrate our resolve and our capacity to defend the American people against those who seek to do us harm.

You know, we — we make it clear again tonight that no matter how long it takes, no matter where you hide, if you are a threat to our people, the United States will find you and take you out.

After relentlessly seeking Zawahiri for years under Presidents Bush, Obama, and Trump, our intelligence community located Zawahiri earlier this year.  He had moved to downtown Kabul to reunite with members of his immediate family.

After carefully considering the clear and convincing evidence of his location, I authorized a precision strike that would remove him from the battlefield once and for all.

This mission was carefully planned and rigorously minimized the risk of harm to other civilians.  And one week ago, after being advised that the conditions were optimal, I gave the final approval to go get him, and the mission was a success.  None of his family members were hurt, and there were no civilian casualties.

I’m sharing this news with the American people now, after confirming the mission’s total success through the painstaking work of our counterterrorism community and key allies and partners.

My administration has kept congressional leaders informed as well.

When I ended our military mission in Afghanistan almost a year ago, I made the decision that after 20 years of war, the United States no longer needed thousands of boots on the ground

in Afghanistan to protect America from terrorists who seek to do us harm.

And I made a promise to the American people that we’d continue to conduct effective counterterrorism operations in Afghanistan and beyond.

In February, our forces conducted a daring mission in Syria

that eliminated the emir of ISIS.

Last month, we took out another key ISIS leader.  Now we have eliminated the emir of al Qaeda.  He will never again — never again allow Afghanistan to become a terrorist safe haven because he is gone, and we’re going to make sure that nothing else happens.  You know, it can’t be a launching pad against the United States.  We’re going to see to it that won’t happen.

This operation is a clear demonstration that we will, we can, and we’ll always make good on the sol- — solemn pledge.

My administration will continue to vigilantly monitor and address threats from al Qaeda, no matter where they emanate from.

As Commander-in-Chief, it is my solemn responsibility to make America safe in a dangerous world.  The United States did not seek this war against terror.  It came to us, and we answered with the same principles and resolve that have shaped us for generation upon generation: to protect the innocent, defend liberty, and we keep the light of freedom burning — a beacon for the rest of the entire world.

Because this is the great and defining truth about our nation and our people: We do not break.  We never give in.  We never back down.

Last year, on September 11th, I once more paid my respects to Ground Zero in New York City, at that quiet field in Shanksville, at the Pentagon — and at the Pentagon.

Standing at the memorial at Ground Zero, seeing the names of those who died forever etched in bronze, is a powerful reminder of the sacred promise we made as a nation: We will never forget.

So we continue to mourn every innocent life that was stolen on 9/11 and honor their memories.

To the families who lost fathers and mothers, husbands and wives, sons and daughters, brothers and sisters, friends and co-workers on that searing September day, it is my hope that this decisive action will bring one more measure of closure.  No day shall erase them from the memory of time.

Today and every day, I am so grateful to the superb patriots who serve the United States intelligence community and counterterrorism communities.  They never forget.  Those dedicated women and men who tirelessly worked every single day to keep our country safe and to prevent future tragedies — it is thanks to their extraordinary persistence and skill that this operation was a success.  They have made us all safer.

And to those around the world who continue to seek to harm the United States, hear me now: We will always remain vigilant, and we will act.  And we will always do what is necessary to ensure the safety and security of Americans at home and around the globe.

Today, we remember the lost.  We commit ourselves to the safety of the living.  And we pledge that we shall never waver from defending our nation and its people.

Thank you, all.  And may God protect our troops and all those who serve in harm’s way.

Investigative Reporter Paul Sperry Shares Stunning Theory On Why Pelosi is Running Again...It'll Blow You Away