Jon Stewart and Jack Posobiec Make Deal, Put DC Politicians On Notice: “I lost my temper a little bit and I realized the important thing is just got to get this done for these guys” 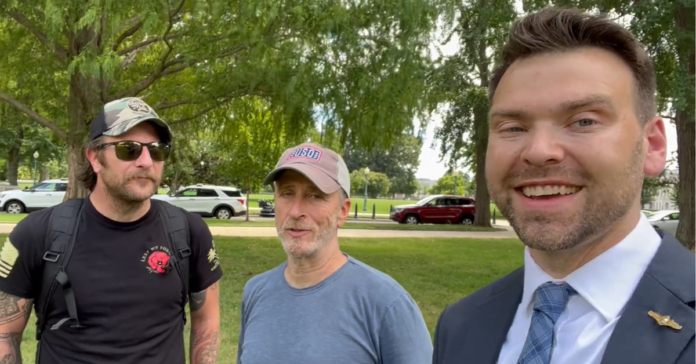 Hollywood star Jon Stewart and Jack Posobiec, Senior Editor at Human Events, reached a deal that has Washington DC politicians on the hot seat. Stewart and Posobeic had a heated argument over the PACT Act, which provides funding for veterans and first responders exposed to toxic chemicals, and which has been stalled by political bickering, before reaching an agreement.

“This is Jack Posobiec. I’m here with Tim Jensen of GruntStyle and Jon Stewart is also here. Jon Stewart and I have decided to come to an agreement. Have we not?”

“Yes, sir,” said Stewart. “I lost my temper a little bit. I felt like I was being trolled and I realized that the important thing is we just gotta get this done for these guys and get them over the finish line to get the healthcare they need.”

I’m here in DC with @jonstewart and @GruntStyle1SG with a message about helping the veterans pic.twitter.com/fdIvBSkRG7

“Is that fair?” asked Posobiec who then shook hands with Stewart.

Stewart mocked his critics earlier by joking to be “Hunter Biden’s cocaine dealer.”

“I’m more gay pride flag than man. I get it.

‘He Shot My Arm Off”: 80-Year-Old Store Owner Turns Tables On Thieves, Sends Them Running To Hospital