‘He Shot My Arm Off”: 80-Year-Old Store Owner Turns Tables On Thieves, Sends Them Running To Hospital 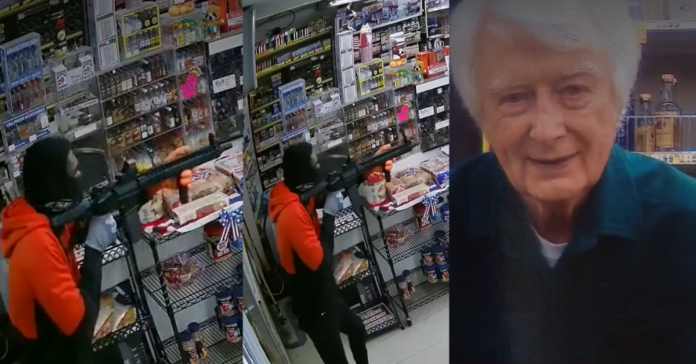 A masked man carrying a rifle burst into a Norco, California market and ordered the 80-year-old owner to raise his hands and get ready to be robbed. Instead, the owner grabbed a shotgun and opened fire sending the thug running for his life screaming, “he shot my arm off, he shot my arm off!”

The Riverside County Sheriff’s Department issued a statement that said: “On Sunday, July 31, 2022, about 2:47 AM, deputies from the Norco Sheriff’s Station responded to reports of an attempted armed robbery at a business located in the 800 block of 6th Street.

“The investigation was corroborated by surveillance video and revealed four armed suspects arrived at the business in a dark colored vehicle. These suspects approached the business entrance armed with long guns wearing facial coverings and hoods. (See Videos Below)

“Immediately upon entering the business with the rifles pointed at the ready, an employee inside the business fired a single shot from a shotgun, causing the suspects to flee the business.

“With the assistance of another law enforcement agency, the suspects were located at a hospital in the Southern California region, one of whom was suffering from a gunshot wound consistent with a shotgun blast.

#WATCH: “He shot my arm off,” cries would-be robber after 80 year old #Norco store owner shoots him with a shotgun. Four arrested, one remains in hospital. Store owner expected back at work. pic.twitter.com/i3LAVdv5WL

“Three additional suspects were also located at the hospital in the suspect vehicle, which had been previously reported stolen.

“The following three suspects were immediately taken into police custody in the hospital parking lot and were booked into the Robert Presley Detention Center for robbery and conspiracy. They are being held in lieu of $500,000 bail:

“The primary suspect, a 23-year-old male, remains hospitalized in critical, but stable condition, and his identity will not be released at this time.

“He will be booked into a Riverside County jail upon his release from the hospital.

“In this case, a lawfully armed member of our community prevented a violent crime and ensured their own safety, while being confronted with multiple armed suspects.

“This investigation is active and ongoing and no additional information will currently be released.

“Anyone with additional information regarding this arrest is encouraged to contact either Investigator Komins or Investigator Morgan at the Jurupa Valley Station,” the statement said.

Jon Stewart and Jack Posobiec Make Deal, Put DC Politicians On Notice: "I lost my temper a little bit and I realized the important thing is just got to get this done for these guys”