Chicago 911 Dispatcher Resigns In Disgust, Tells USA To Pray For Chicago:  “We love serving and protecting, we’re leaving to go somewhere else, just pray for our city” 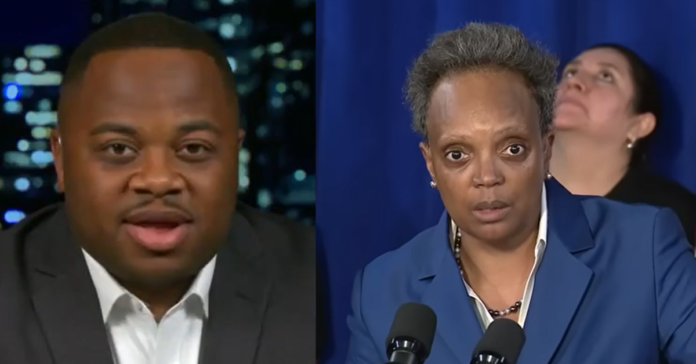 A Chicago 911 dispatcher went on Fox News to say he has resigned in disgust with the leaders of Chicago who have ruined a great city in less than three years. Keith Thornton Jr., went “Fox & Friends First” to denounce Mayor Lori Lightfoot, Kim Foxx, and other city officials for not supporting law enforcement and for lying to residents.

Thornton said: “There is no transparency from the city hall here in Chicago and just a very negligent administration. It was just time. I’m tired of it.

“Constantly every week, every other day, they’re saying that the stats are down with violent crime and people shot and homicides. Listen, being on the other side of the radio as a dispatcher in Chicago, I’m like, this is nonsense. I don’t stand for that. This is wrong.

“We’re supposed to tell these citizens a bunch of fluff that we have resources and police coming and there’s hours and hours before we can get an officer to many of the scenes throughout the city,” he said.

Thornton said Lightfoot is spreading “lies” and that crime has never been this bad in the city.

And he’s not the only one. Cops are leaving the force in droves and replacements are hard to find. And prosecutors are leaving too because the leaders of this city have chosen the side of the criminals over the law-abiding citizens.

“Twenty-five years ago, I was given the opportunity and the privilege to work for the Cook County State’s Attorney’s Office as an Assistant State’s Attorney. This was my dream job. Like each of you, I came here to do good. To represent victims of crime and their families. To be a voice for the voiceless. To do the right thing. To do justice. Those aren’t merely words, they are a way of life.

7/29/22 was my last day as an Assistant State’s Attorney. I was fortunate enough to participate in my final murder jury trial as an ASA, alongside two amazing trial partners. We were able to get some semblance of justice and closure for the family of a single mother who was gunned down in a cell phone store in front of her two kids.

It is beyond difficult to say goodbye to an Office that I truly love, to all of my colleagues and friends and the ASAs I’ve worked with over the years and to those I’ve supervised. To all of the support staff who have stood with me throughout the years.

I have been blessed to have had some incredible supervisors like John Dillon, Darren O’Brien, Ashley Romito and, more recently, Natosha Toller. They exemplified what it meant to be an ASA and the importance of doing the right thing. I have tried to follow in their footsteps. I’ve also been blessed with incredible partners. Way too many to name here. You all have been my family.

I wish I could stay. I would love to continue to fight for the victims of crime and to continue to stand with each of you, especially in the face of the overwhelming crime that is crippling our communities. However, I can no longer work for this Administration. I have zero confidence in their leadership. I am going to look elsewhere for opportunities to make a difference. In addition to saying goodbye to all of you, I wanted to explain some of my reasons for leaving.

I have been thinking about leaving for a while now. Really, the thoughts began back in January of 2021, when the “Safe-T Act” was passed. Seeing this Administration’s involvement in that process was an eye-opening experience for me. To be clear, I am in support of eliminating cash bail- no person should sit in jail solely because they can’t afford to pay for bail. But I never understood the rush on an issue that was so important. I voiced my concerns at the time.

And it was in that process that I began to realize that the Administration’s ‘Mission Vision and Values’ was just a PR stunt, just words on a page. Fairness. Accountability. Integrity. Respect. Collaboration. Those words should mean something. They do to me. And I know that they do to you as well. Yet time after time after time this Administration has shown that they don’t live the meaning of those words. Or they don’t care.

Integrity matters. I am proud that I am leaving with my integrity intact. As young ASAs we are taught that the job of a prosecutor is to seek justice, not merely convictions. That is what I have strived to do on all of my cases and I know it is what each of you do on a daily basis. We do this in spite of the many obstacles that have been placed in front of us. Staffing levels are at an all time low and have been for some time.

All of the Units and Bureaus have been operating at dangerously low levels. Two person courtrooms and one person courtrooms are the norm. This has been going on for some time and is getting worse by the day. This is not a recent phenomenon. This Administration can claim that this attrition is due to the Covid Era. We all know that is not true.

Not create more useless policy positions on the Executive Staff at the expense of hiring more ASAs who can work in the trenches. Meanwhile, the rest of us are overworked, overstressed, and under-resourced. But at least we were allowed to wear jeans in July. Well, those of us not working in courtrooms. That move illustrates how tone-deaf this Administration is. They simply don’t care about the well-being of the ASAs on the front lines.

I cannot continue to work for an Administration I no longer respect. A few months ago, I was summoned into a meeting with the State’s Attorney so she could criticize some bond hearings I did. One involved a massive shootout and the other involved a woman who was walking to the store when she was gunned down in a crossfire. The bond hearings involved gun possession charges only.

The State’s Attorney communicated that she was upset because a headline in a newspaper read ‘Man won’t face murder charge under the Safe-T Act.’ The State’s Attorney voiced her concern with the headline and the heat she was getting from her backers and never voiced any concern over the fact that this woman was shot and killed simply walking to the store. And nobody was going to face a murder charge.

That is what is wrong with this Administration. I’ve seen it day after day. How many mass shootings do there have to be before something is done? This Administration is more concerned with political narratives and agendas than with victims and prosecuting violent crime. That is why I can’t stay any longer.

I know that the men and women of the Cook County State’s Attorney’s Office will continue to do great things for the citizens of Cook County. I am confident that all of you will continue to stand tall and make a difference despite the adversity and obstacles being placed in your way.

I know the last couple of years have been difficult. The Office has been hemorrhaging talent. From seasoned, well-respected veteran prosecutors to many of the younger up-and-coming ASAs. People are leaving in droves.

It is clear as to why. It is not because of Covid. My plea to each of you is to keep your heads up and keep going. Keep doing the right thing, the right way. I know all too well the sacrifices you have made and continue to make.

All of the nights and weekends and holidays that we give up. Seeing how this Administration treated the likes of Alan Spellberg, Guy Lisuzzo, Jenny Coleman and Natosha Toller is disheartening and demoralizing. But you younger ASAs have so much to look forward to. Don’t get disheartened.

It has been the honor of a lifetime to have served the people of the State of Illinois alongside each of you. Keep fighting the good fight,” he wrote.

In an interview on “Chicago Tonight,” special prosecutor Dan Webb said Kim Foxx’s office “cannot explain” how it came to the decision to dismiss the original disorderly conduct indictment filed against Jussie Smollett.https://t.co/o4CnUiD6st