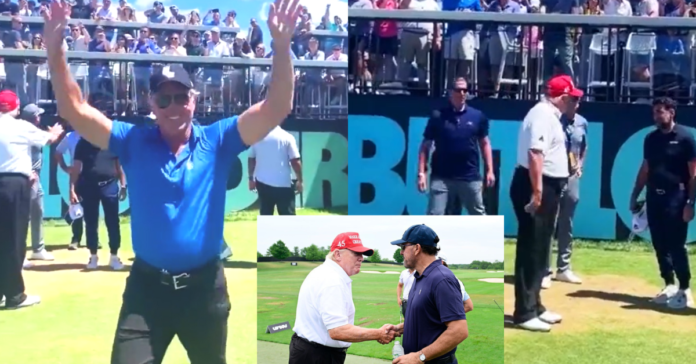 Former President Donald Trump was having a great time at his Bedminster golf club during last weekend’s LIV Golf event. Trump and Tucker Carlson were seen laughing as the crowd greeted them with a “Let’s go Brandan” chant.

At one point the crowd chanted they wanted to see Trump get back in his old job chanting ‘four more years’ while Phil Mickelson led them on by pumping his arms in time with the chants as you can see in the video below.

“The reason why I’m so high on LIV Golf is it addresses the two areas that for the 30 years I’ve played the Tour, they have tried and struggled,” Phil told reporters earlier.

“I think that’s a really big thing as we try to grow the game of golf throughout the world.

“We might not feel it here in the United States, but globally I think that’s going to be a big impact.

“The other thing is we as a game and sport, the viewership has gone up five years to the average age, I believe, of 64.

“We have to target younger generation.”

“One, it’s not a 12-hour day, having to watch golf all day. You’ve got a four-and-a-half-hour window,” he said of LIV’s format.

During the live stream…😂😂😂 pic.twitter.com/6tU8yoj2Hn