Kevin McCarthy Vows To Investigate Nancy Pelosi and Her Husband Paul’s Stock Trades If GOP WIns House In Midterms: “I think what her husband did was wrong” 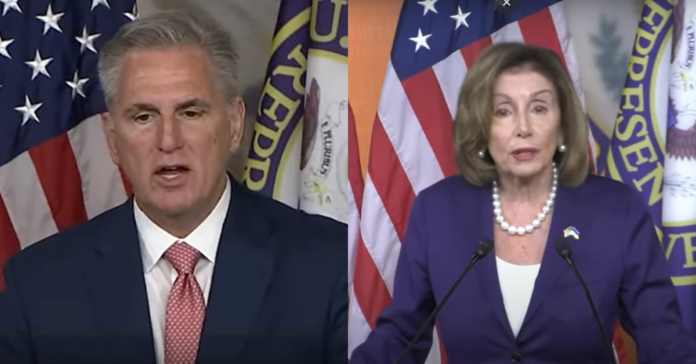 House Minority Leader Kevin McCarthy vowed to investigate Nancy Pelosi and her husband’s Paul stock trades after the Speaker received backlash for Paul’s recent trades and members of her own Party are pushing for a ban.

Kevin said: “I would look all the way through it. What I’ve told everybody is we will come back, and we will not only investigate this, we will come back with a proposal to change the current behavior.”

“Her husband can trade all the way through, but now it becomes a crisis?” he said of the Dems making noise about a bill to ban stock trades by members of Congress and their spouses now, at the end of the term, after the damage has been done.

“I think what her husband did was wrong.”

“I think we need to bring trust back to this institution,” he said.

“I think we have to do a thorough investigation and look at what is the proper role for members of Congress and what influence they have, and I don’t think the proper way to do this is Nancy Pelosi writing the bill because we have proven that she can’t do that.”

Democrats plan to introduce legislation next month that would prevent stock trades by members of Congress and their spouses which Pelosi has long opposed.

“Has your husband ever made a stock purchase or sale based on information he’s received from you?” a reporter asked Pelosi last week. “No. Absolutely not,” Pelosi scolded before walking off.

Paul Pelosi, Nancy’s husband, took a rare and quite massive loss in the markets when he sold some chipmaker stocks he had come under fire for buying before a subsidy bill passed.

According to Punchbowl News:

House Democrats plan to announce a proposal next month to ban lawmakers, their spouses and senior staff from trading stocks, according to multiple sources close to the issue.

The framework, which the House Democratic leadership will release in early August, would force members of Congress, their spouses and senior staff to choose between putting their assets in a qualified blind trust or completely divesting their investment portfolios.

The leadership’s goal is to introduce legislation in the beginning of September and push it through the chamber that month.

Punchbowl News: House Democrats plan to announce a proposal next month to ban lawmakers, their spouses and senior staff from trading stocks, according to multiple sources close to the issue.

Reporter: “Has your husband ever made a stock purchase or sale based on info received from you?”

Pelosi: “No, absolutely not.”

The Pelosi’s recently bought shares in Nvidia, $NVDA, worth millions.

Nancy Pelosi backs the CHIPS Plus bill, a $52B semiconductor bill. pic.twitter.com/uMNIRVxg44