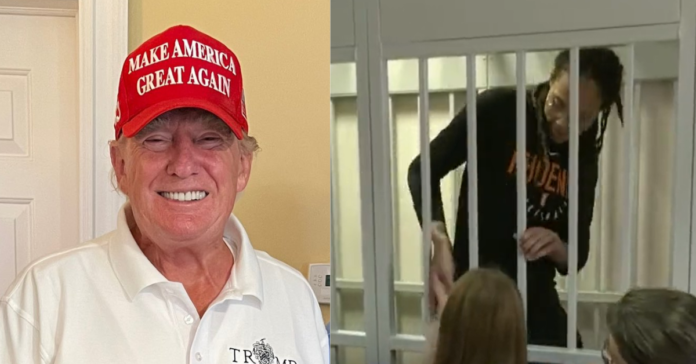 Speaking on Saturday on The Clay Travis & Buck Sexton Show, Trump said “it certainly doesn’t seem like a very good trade, does it?” before saying she admitted carrying drugs in Russia, “she admitted it.”

Trump said: “She knew you don’t go in there loaded up with drugs, and she admitted it. I assume she admitted it without too much force because it is what it is, and it certainly doesn’t seem like a very good trade, does it?

“He’s absolutely one of the worst in the world, and he’s gonna be given his freedom because a potentially spoiled person goes into Russia loaded up with drugs.

“She went in there loaded up with drugs into a hostile territory where they’re very vigilant about drugs.

“And she got caught.

“And now we’re supposed to get her out — and she makes, you know, a lot of money, I guess.

“We’re supposed to get her out for an absolute killer and one of the biggest arms dealers in the world.

Mike Pompeo said: “He’s a bad guy. He is a guy who wanted to kill Americans.

“It presents a real risk to the United States.

“There’s a real reason the Russians want to get him home.

“To offer a trade like this is a dangerous precedent.

“This is not a good trade, not the right path forward, and it’ll likely lead to more,” he said.

Trump slams reported prison exchange of ‘spoiled’ Griner for ‘Merchant of Death’: “It certainly doesn’t seem like a very good trade, does it?”https://t.co/bd9HSYW4TI

Chris Cuomo Questions Purpose Of Liz Cheney’s Committee: “Starting to play like a gotcha game, like the impeachment, I don't see that there's criminality there, at least in what's been offered”