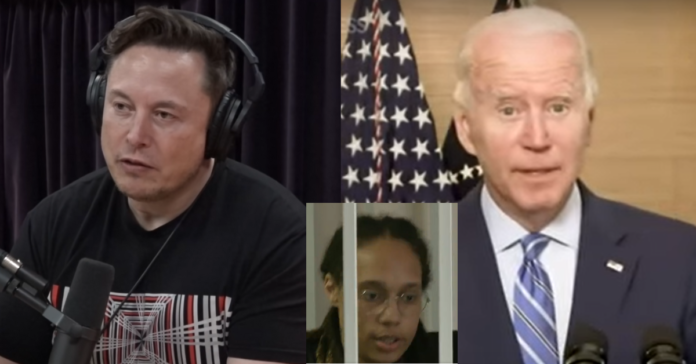 Elon Musk called out President Joe Biden over the proposed trade for WNBA player Brittney Griner for a Russian war criminal dubbed the ‘merchant of death.’

Many have questioned Biden’s potential trade even as Putin adds names to the list. Biden is in a tight spot because Putin knows Joe needs to bring home Griner home or face a revolt from the left.

But the cost may be high for Joe who is running dangerously low on political capital. Musk responded to a Twitter post showing the picture of an unhappy man with the caption:

“Maybe free some people in jail for weed here too?”

Maybe free some people in jail for weed here too? pic.twitter.com/AYo0ZC79lZ

Speaking on Saturday on The Clay Travis & Buck Sexton Show, Trump said “it certainly doesn’t seem like a very good trade, does it?” before saying she admitted carrying drugs in Russia, “she admitted it.”

Trump said: “She knew you don’t go in there loaded up with drugs, and she admitted it. I assume she admitted it without too much force because it is what it is, and it certainly doesn’t seem like a very good trade, does it?

“He’s absolutely one of the worst in the world, and he’s gonna be given his freedom because a potentially spoiled person goes into Russia loaded up with drugs.

“She went in there loaded up with drugs into a hostile territory where they’re very vigilant about drugs.

“And she got caught.

“And now we’re supposed to get her out — and she makes, you know, a lot of money, I guess.

“We’re supposed to get her out for an absolute killer and one of the biggest arms dealers in the world.

Mike Pompeo said: “He’s a bad guy. He is a guy who wanted to kill Americans.

“It presents a real risk to the United States.

“There’s a real reason the Russians want to get him home.

“To offer a trade like this is a dangerous precedent.

“This is not a good trade, not the right path forward, and it’ll likely lead to more,” he said.

Kevin McCarthy Vows To Investigate Nancy Pelosi and Her Husband Paul’s Stock Trades If GOP WIns House In Midterms: “I think what her husband did was wrong”