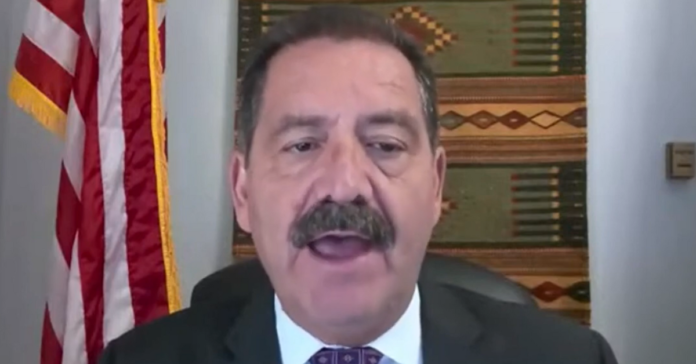 Dem Rep. from Illinois, Chuy García, is blaming a staffer for making an “unauthorized tweet” that used “profanities and offensive language.”

“The language used was absolutely inappropriate and inconsistent with Congressman García’s history, values, and character. The individual responsible will be held accountable and appropriate disciplinary action will be taken.

Fox News reporter, Joseph A. Wulfsohn, posted a screenshot of the exchange:

“I just voted to reinstate the assault weapons ban. Now it’s the Senate’s turn to pass it and send it to President Biden’s desk.

“Weapons of war have no place in our communities,” García’s tweet says.

Rep. Chuy García (D-IL) tweeted profanities and a slur in response to a random Twitter account with 531 followers who trolled him. pic.twitter.com/LUjqWnDoxd

A Twitter user said, “Never even heard of this guy and I won’t comply even if his silly law passes.”

García’s account replied with: “You are borderline retarded, ya f*cking dipshit.”

The offending Tweet was taken down a few hours after it was posted.

Mr. Garcia and his team should focus more on Chicago’s crime than on trolling the internet. From ABC:

Nineteen people were shot, two fatally, in shootings across Chicago over the weekend, police said.

A man was killed and two others were critically wounded in a shooting early Saturday in Gresham on the Far South Side. They were stopped at a red light in the 2000 block of West 87th Street when two people in a black Sedan pulled up and fired at least 40 shots about 1:10 a.m., Chicago police said.

A man, 31, was shot in the head and was transported to Christ Medical Center in Oak Lawn, where he was pronounced dead, police said. A woman, 25, suffered multiple gunshot wounds and was taken to the same hospital.

The man, 31, was standing near a sidewalk in the 1800 block of North Milwaukee Avenue when someone in a a vehicle approached him and opened fire around 1:40 a.m., Chicago police said.

He suffered a gunshot wound in the chest and was taken to Illinois Masonic Medical Center, where he was pronounced dead, police said. No one was in custody. Detectives are investigating the area

Hall of Famer And King Of Championship Rings Bill Russell, Dead At 88