Chris Cuomo Questions Purpose Of Liz Cheney’s Committee: “Starting to play like a gotcha game, like the impeachment, I don’t see that there’s criminality there, at least in what’s been offered” 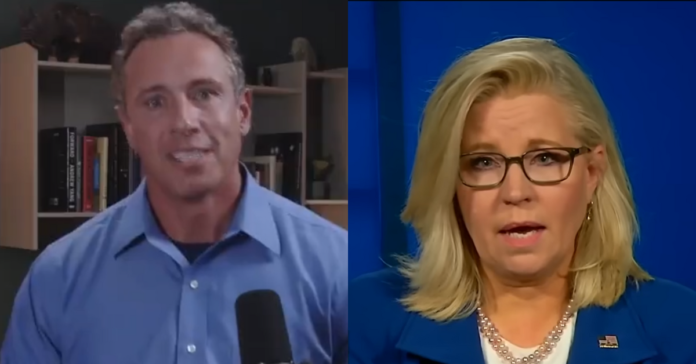 Former CNN host Chris Cuomo trashed Liz Cheney’s last job in politics, running the Jan 6 committee, saying it was ‘starting to play like a gotcha game like impeachment,’ and that he has not seen any criminality. Below is a transcript of his podcast.

CHRIS CUOMO: Now, absolutely it is in your interest for what happened and by whom to be rooted out and remedied. There could be crimes, especially on this fugazi elector front that we’re just learning about now. Less so I think around the planning and the practical aspects of what happened on January 6.

I don’t see that there’s criminality there, at least in what’s been offered. My question is, are we really learning enough about what matters? Or is this starting to play like a gotcha game? Like the impeachment.

Again, not that the issues that were involved in impeachment don’t matter. But you knew you were never going to have the outcome. The argument was well, “but this is what we have to do. This is our job.” I don’t know. I don’t know.

There’s no question, as with the Mueller probe, Trump and his cronies were doing bad things.

Things they know they should not have been doing and arguably that makes them lousy leaders.

But getting Trump for treason? Why even go there? They go there because it fuels the fringe aspects of the party.

Collusion with Russian operatives. Yes. Collusion is behavior. It’s not a crime, the crime is conspiracy and it’s a distinction with a difference and they were nowhere near it.

And it wasn’t ever going to be prosecuted.

So why tear at the fabric that way?

Why not achieve the goal of exposing what it is, and if it’s politics, keep it in politics.

Fomenting tension, lying to inflame just to create more outrage. Wanting to watch a run on the Capitol, ignoring violent intentions. These are all terrible, but treason?

You know, you wind up undercutting your purpose when you exaggerate the desired outcome or consequence.

It reminds me of when the right wanted to get Clinton criminally for lying about messing around.

Forget about the fake morality that was at play. You know, the politicians just don’t get Americans. You’re not looking for perfect people, you know that we’re all flawed.

You want a more perfect union. You want people who will lead us with ideas and actions that make us better or at least who try.

But politicians making politics into a policing action with criminal consequences? No, thanks. Not with Clinton, not with Trump and his cronies, not with “but her emails.” Not saying that now, right?

The January 6 hearings lose their impact on consensus because of the intended consequences pursued.

We all know now what went down and that Trump and co. acted horribly. Regular people get it.

And the media. Look it fans the flames. Why? ‘Criminal reference,’ ‘criminal consequences.’ That’s provocative.

They are reflecting what the Democrats and others are saying, but they should be pushing back as well.

You know, not all flames need to be fed. Some need to be smothered. Less distraction more traction on what matters to you. Regular people.

I’m not saying democracy doesn’t matter, our institutions don’t have to be protected. Of course, they do. But does anyone think that these hearings, that’s what they ultimately yield?

SHOCK: Chris Cuomo raises questions about the intent and goal of the January 6 committee.
“Is this starting to play like a gotcha game? Like the impeachment.”
On impeachment, he says “you knew you were never going to get the outcome … Was that really in America’s interest?” pic.twitter.com/4oZjPervxC

He says that those talking about locking up Trump on “treason” “go there because it fuels the fringe aspects of the party.”
And on the Russia hoax, he asks “So why tear at the fabric [of America] that way?”
And warns not to “exaggerate the desired outcome or consequence.” pic.twitter.com/paTxfQsUVp