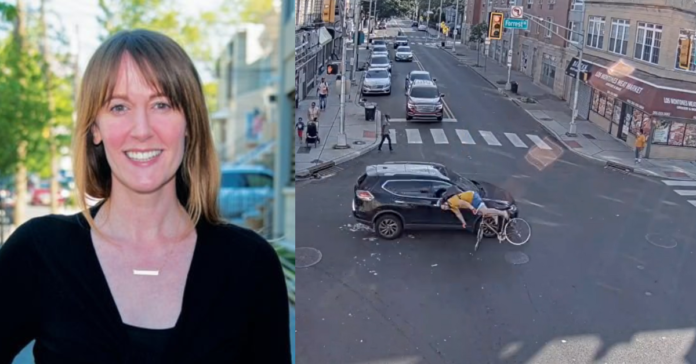 A New Jersey Dem councilwoman was caught on camera hitting a cyclist with her SUV, knocking him off his bike, and speeding away as if nothing happened. Jersey City councilwoman Amy DeGise was busted on video camera slamming into Andrew Black at 8 a.m. on July 19. Black is a deliveryman for UberEats.

He said: “I look left, suddenly I just hear ‘Bam.’ I get hit. I roll over and I’m in such pain. Someone of prestige who is demanding to uphold and clean our streets or whatever they’re calling it can’t even do it themselves. It really upset me.”

According to Hudpost: “At approximately 8:00 AM on July 19, 2022, Andrew Black was working for Uber Eats while traveling on his bicycle to pickup a delivery order from McDonald’s in the Hub. Black, a resident of Jersey City’s Ward F, was riding south on Martin Luther King Drive when he was struck at the Forrest Street intersection.

“Regarding the collision, Black recalls that he “hit the hood,” “rolled over,” and was assisted by members of the local community. HudPost has reviewed video footage that appears to capture a black Nissan Rogue striking a cyclist, nearly head-on, at the aforementioned intersection.

“Black was grateful that, despite dealing with deep bruising, he didn’t suffer major physical injuries; however, he suffers from Post Traumatic Stress Disorder (PTSD) and says the incident has already caused increased anxiety.”

Black was pedaling through a red light at the time of the crash so he is not blameless.  DeGise was however given a summons for leaving the scene of an accident and failing to report it.

A Change.org petition calling for the councilwoman’s resignation has over 2,000 signatures already. It says:

Amy DeGise, at-large Councilmember,  hit a cyclist at speed and then left the scene. Video footage shows us she made no effort to avoid the cyclist, to slow down after impact, or to stop to check on him and file a police report. The cyclist running the red light does not change anything about DeGise’s responsibility to the victim and to the law.

Councilmember DeGise should have resigned as soon as this news came out. She must resign now and the Mayor and councilmembers must call publically for her resignation.

As an at-large member of the council, Councilmember DeGise has the hefty task of representing the full city and the best interests of all its residents. By striking and abandoning one of those residents, in a time of crisis, she has shown she cannot be trusted to put the well-being of residents first. To hit a constituent and leave them speaks to a deeply troubling level of self-preservation instinct, and one that has no place in public service.

Staying at the scene is an act of responsibility, and humanity towards the victim – not to mention, a driver’s legal obligation. It

I am disgusted that other Councilmembers and the Mayor – who ran DeGise on his slate in this most recent election – have not encouraged her resignation. While the justice system moves slowly forward on this crash, DeGise’s actions will be a distraction from urgent matters facing our city. It will take months for this case to move forward, months that the Council will continue to meet and vote. It is inappropriate to have Councilmember DeGise participating in those votes when it is clear she puts her own interests above those of residents.

Councilmember DeGise should have already chosen to step down as the only honorable action. But she has already shown us that she cherishes her own ambitions above the well-being of residents. Now, her colleagues must urge her resignation publically so the Council can return to the business of the people. Silence is complicit, and will not be forgotten in campaign season.

“Get out of my way peasant, I’m going to get my nails done!”

Well, It’s Official, The CNN “Reboot” Has Gone Careening Off The Rails