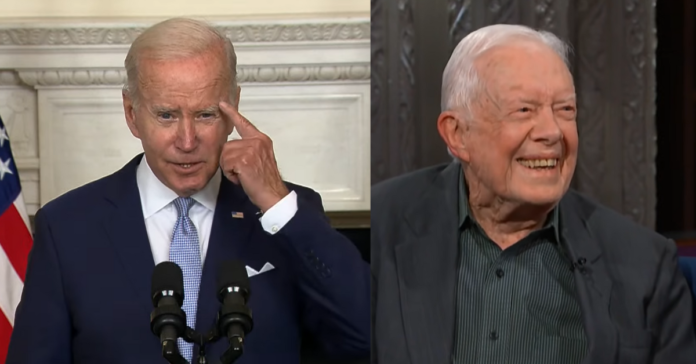 President Joe Biden has hit rock bottom according to new Gallup numbers that said Biden’s average approval rating during the sixth quarter of his presidency hit the lowest number for anyone ever elected to the office. Ever.

Biden had a poll approval of just 40 percent at the end of his sixth quarter in office. This is the lowest EVER for a POTUS at this stage of his presidency. Donald Trump and Jimmy Carter both had 42 percent approval at the same stage which was the lowest score in US history until Biden.

Barack Obama was at 47 percent in the same period, while George W. Bush had 75 percent. Bill Clinton had 46 percent.

“During this time, an average of 40% of Americans approved of the job he was doing as president.

“No president elected to his first term has had a lower sixth-quarter average than Biden, although Jimmy Carter’s and Donald Trump’s ratings were only slightly better, at 42%.

“President Joe Biden’s job approval rating has fallen below 40% for the first time and now sits at a personal low of 38%.

“Between September and June, the president’s rating had ranged narrowly between 40% and 43%.

President Joe Biden’s average approval rating during the sixth quarter of his presidency is the lowest for anyone ever elected to the office. 👉Somewhere Jimmy Carter is smiling.
https://t.co/tNE6zf4xN9

New Theory On "The Swap" Emerges, And Joe Won't Be the First To Go...