If I was Eric Swalwell’s wife, I’d have left this bum a long time ago. Between the Chinese spy he had an affair with, and now, this photo, showing him “chatting it up” with two very scantily dressed young women, who look like they’ve just walked out of a club, or a brothel, he’d be history. I mean, what’s keeping her there? Certainly, it’s not his stunning good looks, brilliant mind, or political aspirations, that’s for sure. Remember his 2020 “presidential run?” I think the best word to describe that was “embarrassing.” And speaking of that word, this latest photo comes from Human Events editor Jack Posobeic, who says that he got the image from one of his sources in DC.

The photo shows a very happy-looking Eric, engaging two very “sexy” women, in very short skirts, who do not look like constituents. Eric appears to be trying to look very “suave” as he stands there with one leg kicked out, and his hands on his hips, with his jacket wide open. The body language is clear as day… Eric is having a “fang fang” moment.

Here’s what Jack said: “I have obtained a candid photo of Congressman @ericswalwell out on the street today from a contact in DC”

I have obtained a candid photo of Congressman @ericswalwell out on the street today from a contact in DC pic.twitter.com/lt5wAv6Drp

Here’s a closeup of the picture: 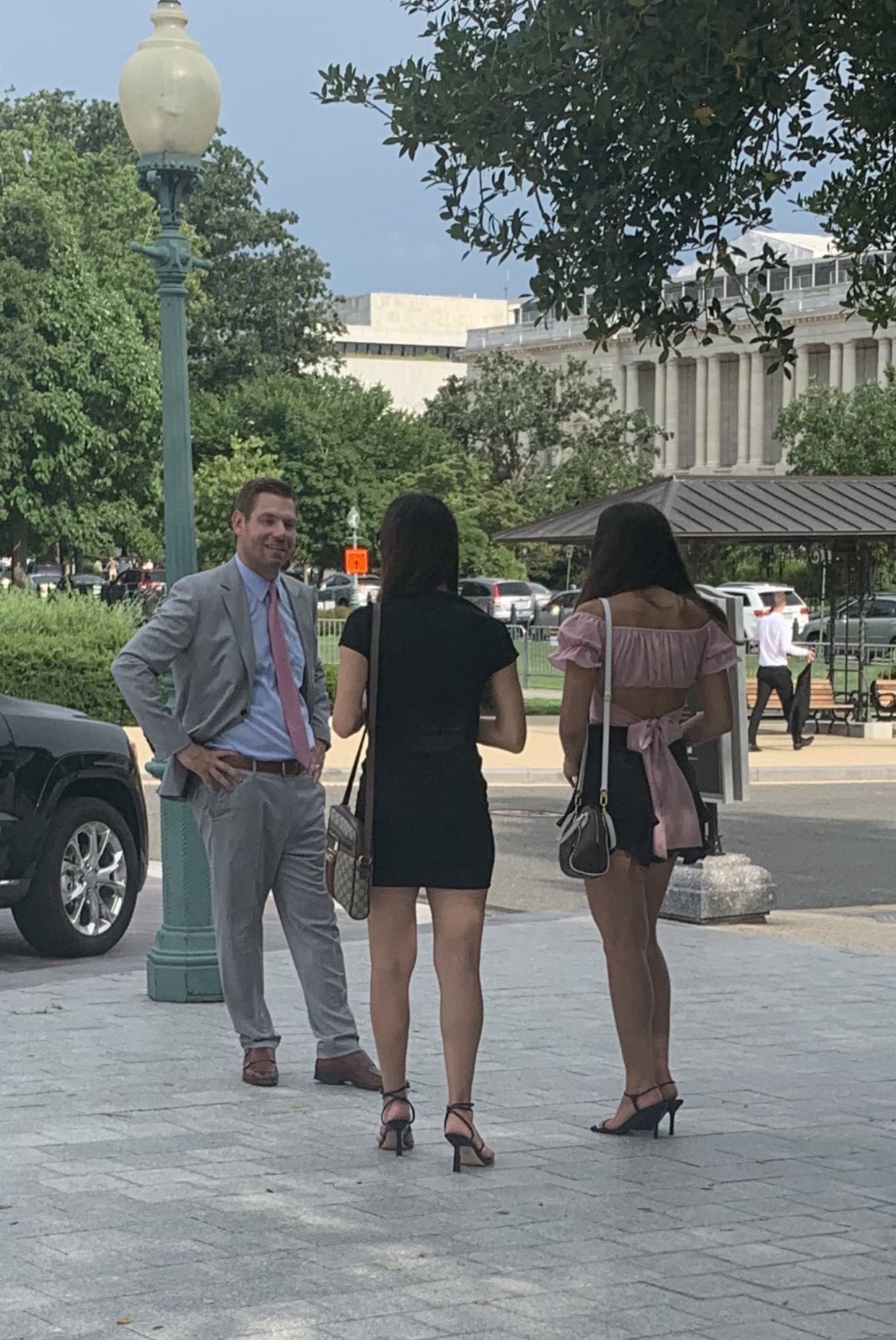 But there’s a twist to this story.

Now, we’re hearing from Jack Posobiec, that these two sexy ladies may be Project Veritas operatives who set up Swalwell. Wouldn’t that be a fun plot twist???

As you can imagine, people had a lot to say about this photo:

“Ole Eric can’t seem to be a decent married man, can he?”

“Hmmm. what kind of proposition do we have here”

“Nothing to see here. Just a Congressman having an open-air interview with some… enterprising young women.”

“Me love you long time just like Fang Fang””

“One must assume Swalwell is standing on his corner and those two hotties approached him to discuss the weather.”

“As I’ve said before, the day to day life of a politician would suck. People who want to be politicians mostly want to be them because it gives them access to the things rich people have without having to actually accomplish anything.”

“I asked my 15 year old son “do you recognize who this is??” & he said “some married perv trying to pick up two college chicks”.

I don’t know what the real deal is with this photo, but I hope it was Project Veritas, and if it was, grab your popcorn, because that’ll be some good fun.

Wikipedia Changes It's Definition Of Recession 41 Times In A Week!