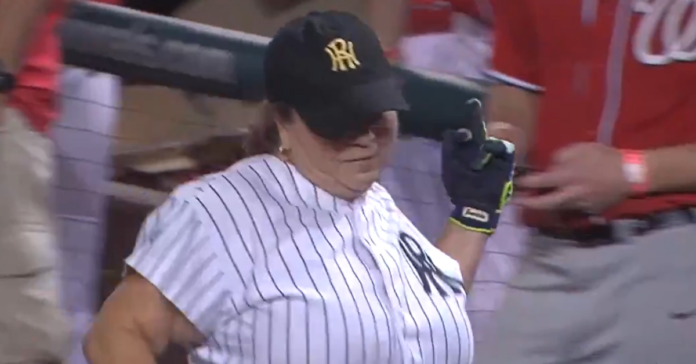 Rep. Linda Sanchez (D-CA) went full sore loser on live television when she made an obscene gesture towards the Republican bench during the Congressional Baseball Game last night.

Sanchez was walked by Rep. August Pfluger (R-TX). After running to first base, Sanchez was removed for a pinch runner, Rep. Hakeem Jeffries (D-NY). On her way back to the Democratic bench she passed the GOP side and gave them the stink eye before flipping them the bird.

Why was Sanchez so mad? We don’t know but the GOP humiliated the Dems side winning the game 10-0.

Democrat Rep. Linda Sanchez (CA) flips off the Republican dug out. Her team got blown out 10-0.pic.twitter.com/CgPOaEsLs4

“Sanchez should be banned from all future Congressional baseball games and permanently stripped of all committees.

“Congresswoman Linda Sanchez flipping off Republicans in a charity game to support the Boys and Girls Club of DC. Sad!”

Speaker Nancy Pelosi was the coach for the Democratic team, said in an interview with Fox News’:

“This game is so great and people are so nice.

“That’s what makes it great that we’re competitive, and it’s great to be here and have a little fun. “

Congresswoman Linda Sanchez flipping off Republicans in a charity game to support the Boys and Girls Club of DC. Sad! pic.twitter.com/wOLL6krs48