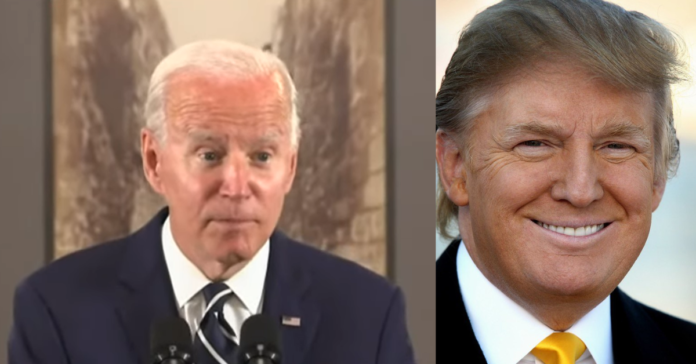 President Joe Biden caved and proved former President Donald Trump 100% correct as the Department of Homeland Security authorized the completion of the Trump-funded U.S. Mexico border wall near Yuma, Arizona because four wide gaps make it among the busiest places for illegal crossings.

“These projects address operational impacts, as well as immediate life and safety risks, and will be funded with DHS’s Fiscal Year 2021 appropriations.

“The gaps are located within the former Yuma 6 project area, a border barrier project that was previously funded by the Department of Defense’s (DoD) military construction appropriation pursuant to 10 U.S.C. § 2808. Due to the proximity to the Morelos Dam and the swift moving Colorado River, this area presents safety and life hazard risks for migrants attempting to cross into the United States where there is a risk of drownings and injuries from falls.

“This area also poses a life and safety risk to first responders and agents responding to incidents in this area.

“Prior to construction, DHS will engage in standard environmental planning and conduct stakeholder outreach and consultation.

“DHS will move as expeditiously as possible, while still maintaining environmental stewardship.

“This project supports CBP’s and DHS’s priority to deploy modern, effective border measures and also improving safety and security along the Southwest Border,” the statement said.

“Democratic U.S. Sen. Mark Kelly of Arizona, who is seeking his party nomination’s next week to defend the seat in November, has pressed the Biden administration to close the gaps, calling them a challenge for officials trying to secure the border.”

Biden administration authorizes completion of the Trump-funded U.S.-Mexico border wall in an open area of southern Arizona near Yuma, where four wide gaps make it among the busiest corridors for illegal crossings. https://t.co/XUkmYOggev

Greg Abbott Reminds Joe Biden Who’s Boss After DC Mayor Called For National Guard: “Washington DC finally understands what Texans have been dealing with every single day as our communities are overrun and overwhelmed by thousands of illegal immigrants thanks to President Biden’s open border policies”