Greg Abbott Reminds Joe Biden Who’s Boss After DC Mayor Called For National Guard: “Washington DC finally understands what Texans have been dealing with every single day as our communities are overrun and overwhelmed by thousands of illegal immigrants thanks to President Biden’s open border policies” 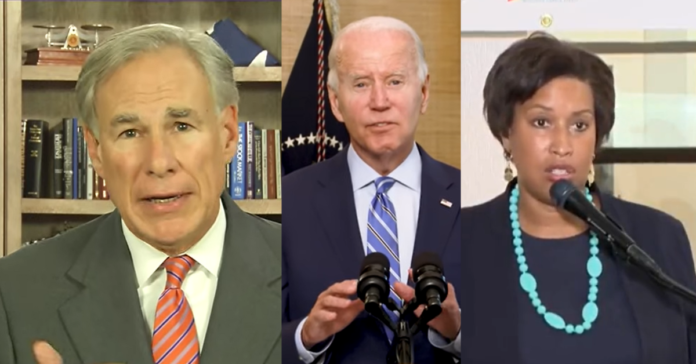 Texas Governor Greg Abbott responded to the news that D.C. Mayor Muriel Bowser has requested the National Guard be deployed to help her deal with an influx of migrants after Abbott and his state reached their limit, physically and mentally, and started sending migrants to DC.

Abbott said: “Washington DC finally understands what Texans have been dealing with every single day as our communities are overrun and overwhelmed by thousands of illegal immigrants thanks to President Biden’s open border policies.

“If the mayor wants a solution to the crisis she should call President Biden to take immediate action to secure the border, something he has failed to do. The true ongoing humanitarian crisis is along our southern border.

“The Biden administration is allowing historic levels of illegal immigrants, weapons, and deadly drugs like Fentanyl to surge into our state.

“Texas continues stepping up to respond to this crisis by deploying Texas National Guard soldiers and DPS troopers, building on border wall, busing migrants to our nation’s capital, and now sending illegal immigrants back to the border.”

“BREAKING: DC @MayorBowser requests @DCNationalGuard activated indefinitely to help migrant busses arriving in DC. Calling it a “humanitarian crisis” that has reached a “tipping point” with 4,000 migrants so far. Requesting DC Armory be used as a processing center.”

Jean-Pierre: “Republicans are using migrants as a political tool.”

Doocy: “So the White House’s preference would be for small towns in Texas and Arizona to take care of these migrants and not DC.”

Jean-Pierre: “They are sending migrants to big cities as a political ploy.” pic.twitter.com/JGXkkzn79a

Mayor Bowers told reporters: “So we are very focused and we continue to be very focused on having the federal government do its part to take the lead in addressing what we see as a growing humanitarian crisis with people who are seeking asylum coming across the country to get their final destinations.

“We’ve had a number of discussions, we faciltitated FEMA’s involvement with a $1 million grant that has now been increased to work with our nonprofit agency, we facilitated using those grant funds to set up a center in a neighboring jurisdiction and I’ve also asked the Secretary of the Army to deploy the DC National Guard to help lead that effort.

Bowser said 4,000 migrants have arrived so far in a “humanitarian crisis” that has reached a “tipping point.”

Bowser requested the help of the National Guard in a letter to the office of the Secretary of Defense Lloyd J. Austin dated July 19 and a second letter to White House aides dated July 22.

“The migrant crisis facing our city and our country through cruel political gamesmanship from the Governors of Texas and Arizona must be dealt with at the federal level,” the July 22 letter read.

“Washington D.C. finally understands what Texans have been dealing with every single day, as our communities are overrun by thousands of illegal immigrants.” @FoxNews pic.twitter.com/KGB0Qz98W4

DC’s Mayor is calling to activate the National Guard as a result of an increase in illegal immigrants to the city. pic.twitter.com/GEbhXKnHa3