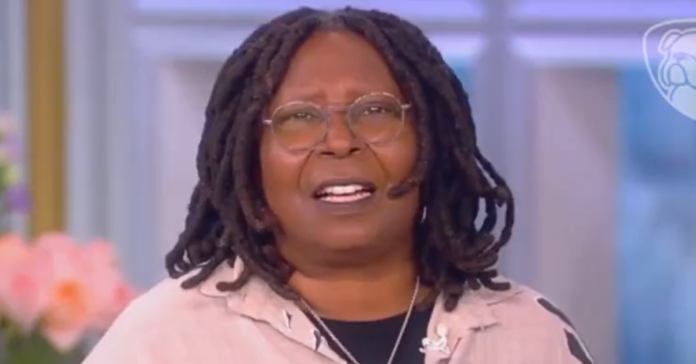 Whoopi Goldberg caved and made a personal apology to a group of conservative students after her smear job backfired and caused national outrage.  Turning Point USA demanded an apology and a retraction from The View co-hosts in a cease and desist letter.

“A Turning Point USA spokesman said the group, quote, ‘100 percent condemns those ideologies,’ and said Turning Point USA security tried to remove the Neo-Nazis from the area but could not because they were on public property.  (See Video Below)

“So we apologize for anything we said that may have been unclear on these points,” Haines said.

The conservative group didn’t it saying:

“Whoopi is the one who said it. She should be the one to offer the apology.”

Turning Point USA sent a letter to ABC that said:

“The false statements of fact intentionally made during The View’s July 25th segment were unquestionably harmful to TPUSA’s reputation and brought the organization and its student affiliates into disrepute with the public, potential donors, and current and future business partners, posing a significant financial loss to the organization.

“The View hosts intentionally and falsely associated TPUSA with neo-Nazi protestors outside the event placing TPUSA in denigrating and false light and negatively impacting its public perception. Such action will not be tolerated.

“Specifically, The View hosts insidiously and cavalierly stated that TPUSA ‘let [neo-Nazis] in’ to its SAS event, metaphorically ‘embrase[d] them’ [sic] and that neo-Nazis were ‘in the mix of people.’

Round Two: Whoopi Goldberg make ANOTHER retraction of her irresponsible and disparaging comments against the students who attended Turning Point USA’s event last weekend.
“It’s not any better when I make assumptions about other people, which I did. So, my bad. I’m sorry.” pic.twitter.com/BTLzbnSZVg

“The assertion that TPUSA is complicit or affiliated in any way with the neo-Nazi protesters outside the event is outlandish, false, defamatory, and disgraceful.

“Even after Ms. Haines reluctantly read the TPUSA statement that it condemns the group of neo-Nazis and that the group had nothing to do with TPUSA, its event, or its student attendees, Ms. Goldberg continues the false tirade against TPUSA, asserting that somehow the organization and its attendees were ‘complicit’ and/or associated with the outside protest.

“To be abundantly clear, TPUSA aggressively and completely condemns the ideologies of neo-Nazism and has zero connection to the protestors outside the event.

“Since these individuals were located on public property, TPUSA security attempted to, but was not permitted to remove them,” the letter said.

UPDATE: The View issues new statement on their TPUSA lies

What do you think?

I say not good enough. Whoopi doesn’t get away with this that easypic.twitter.com/Aan7B6Zwuh

Dems Are Taking Down Biden As We Speak, And They Just Flung Fresh Dirt All Over Him