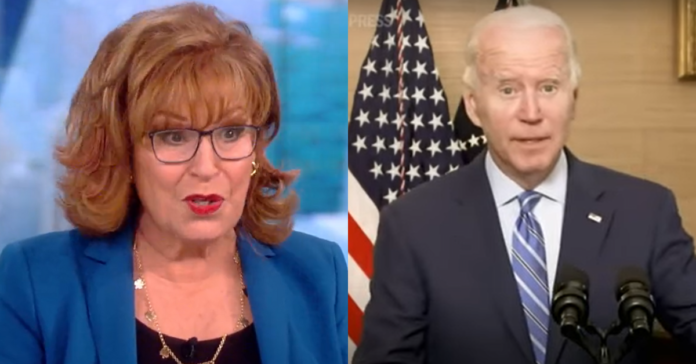 Joy Behar and her co-hosts on The View tried to downplay President Joe Biden’s recession after the White House released data that showed two consecutive quarters of negative growth.

The lone conservative voice on the show, Alyssa Farah reminded Joy that ‘Brian Deese, the head of the National Economic Council in the Biden White House defined a recession as two straight quarters of economic decline.’

Now, the White House is not calling it a recession citing other strong economic indicators but Biden’s rhetoric is betrayed by his own Federal Reserve which is raising rates in order to induce a recession before Biden’s inflation ruins the country. The wealthy Behar, at one point during the show, had a ‘let’em eat cake’ moment telling her middle-class audience who are getting crushed by inflation to deal with it because it ‘comes and goes.’ Below is a transcript of the show.

ALYSSA FARAH GRIFFIN: My concern is this: I think the White House and Senate Dems are being too cute by a half. So, today it came out we have the second straight quarter of decline in the economy.

FARAH GRIFFIN: Of GDP decline which by most definitions does amount to a recession. Brian Deese, the head of the National Economic Council in the Biden White House defined a recession as two straight quarters of economic decline.

FARAH GRIFFIN: They’re not calling it that. And then we’ve got this – this – act

BEHAR: What are they calling it?

FARAH GRIFFIN: They’re saying it’s not quite a recession yet, and then we’ve got this act which they’re calling the Inflation Reduction Act of 2022.

FARAH GRIFFIN: I hope it does that. I’m not confident it will. It is raising taxes. And I know there’s various–

BEHAR (interrupting): On corporations only! And people who make over $400,000!

FARAH GRIFFIN: My fear is on corporations, then that trickles down to job growth. And one thing that Democrats—

HOSTIN (interrupting): Corporations aren’t putting – the money back into their employees! They’re taking the profits, Alyssa, and they’re pocketing it themselves! You know that.

FARAH GRIFFIN: My fear – My fear is this.

FARAH GRIFFIN: Respectfully, right now — [ applause ] — My family, very middle class, groceries they can’t afford. They’re filling their gas tanks halfway. And not all of that is on Joe Biden, but the economy isn’t looking so good under Democrats right now. And what I would say is this: even if you call it the Inflation Reduction Act, I’m not confident it’s going to do that because the one thing the Biden administration can point to as a success right now is low unemployment. I think this is going to lead to higher unemployment if you are taxing corporations.

BEHAR: Isn’t it more important that the carbon emissions will be reduced by 40 percent by 2030? Okay? So, inflation comes and goes, but the air we breathe is more important.

SARA HAINES: Now the economy is on all Americans’ minds. Families are paying more at the grocery store, feeling the pain at the pump. And a new report out this morning shows the economy shrank for a second straight quarter and some say we are officially in a recession. Yet President Biden has said we are on the right path. A lot of Americans don’t feel that way. So, is there a disconnect here, and is it going to get worse?

KARINE JEAN-PIERRE (White House press secretary): So, let me just first say, and, you know, I want to make sure that I say this to Americans who are watching, your audience, your viewers. The President understands the anxiety that people feel about the economy, about inflation, the cost that they’re seeing around them. That’s why he has put forth a plan to really attack inflation and bring those costs down.

Let me speak to the numbers that you just mentioned, that GDP number that you just mentioned. So, if you look at prior — prior recessions — what happens prior before a recession in U.S. history, you see jobs lost, and that’s not what we’re seeing right now. Right now we’re seeing gains. 2.7 million jobs created in the first six months, 1.2 million jobs created in the last quarter. 3.6 percent unemployment.

That matters, and when you look at it more broadly at the data, and that’s why we’re seeing – what we are seeing is that we are in a transition. We had this strong economic growth because of the work that this President has done in the past 18 months, and now what we’re seeing is a transition into stable and steady growth.

But we get it. We get that people are still feeling a little bit more pain. And so, what you are going to hear from the president in the 12 – the 12 o’clock hour, I hope your audience listens in, and your viewers listen in. He’s going to talk about how congress is acting on this piece of legislation called the Inflation Reduction Act.

And what that’s going to do which is something he supports and has been working on since he was senator is bring that pharmaceutical prescription drug prices down. I mean, we’re talking about how this is going to be incredibly instrumental to families and seniors. Our grandparents who have to think about, how are they going to pay for their medicine? This is what this piece of legislation is going to do.

“Before a recession in U.S. history, you see jobs lost, and that’s not what we’re seeing right now … we’re seeing gains,” White House @PressSec Karine Jean-Pierre tells #TheView of the news the U.S. economy shrank by 0.9% from April through June for a second straight quarter. pic.twitter.com/nmtrfplnA5

This doctor’s shocking revelations have Dr. Fauci shaking in his loafers

Adam Kinzinger just made this absurd prediction about Donald Trump