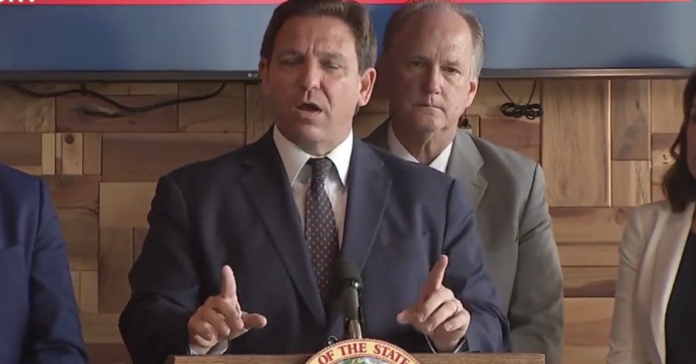 “The nature of the performances described above, particularly when conducted in the presence of young children, corrupts the public morals and outrages the sense of public decency,” the complaint says.

The complaint was filed to the Florida Department of Business and Professional Regulation by the agency’s Division of Alcoholic Beverages and Tobacco.

R House ownership released a statement: “We are aware of the complaint and are currently working with the Department of Business and Professional Regulation, through our attorney, to rectify the situation. We are hopeful that Gov. DeSantis, a vociferous supporter and champion of Florida’s hospitality industry and small businesses, will see this as what it is, a misunderstanding, and that the matter will be resolved positively and promptly.”

DeSantis said: “We take the well-being of children very seriously.

“We want to make sure that we have a state and we have a community where kids can be kids.”

“Having kids involved in this is wrong and it is not consistent with our law and policy in the state of Florida, and it is a disturbing trend in our society to try to sexualize these young people.

According to NBC Miami:

In response to circulating video of children partaking in a Wynwood bar’s drag show brunches, Gov. Ron DeSantis has filed a state complaint against the business.

The complaint accuses the establishment of disorderly conduct, stating that the shows are conducted in the presence of minors and “corrupts the public morals and outrages the sense of public decency.”

DeSantis said an investigation by the Florida Department of Business and Professional Regulation was conducted following the release of the video showing an exposed drag queen and young girl hand-in-hand at an R House show.

In the clip, the drag queen is seen wearing lingerie as she parades the girl around the restaurant.

NOT IN THE SUNSHINE STATE: DeSantis Files Complaint Against Restaurant Exposing Kids to Drag Show https://t.co/tAYyc54SKI