Matt Gaetz Denies Rumors DeSantis Will Run Against Trump: “These guys are on the same side, largely a media creation” 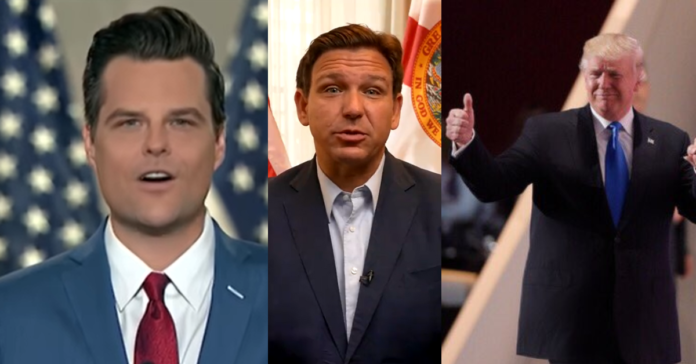 Rep. Matt Gaetz (R-FL) said he does not believe Florida Gov. Ron DeSantis will challenge former President Donald Trump in a 2024 GOP presidential primary should Trump decide to give up his nice life again and get back in the game

Gaetz said “I think that’s highly unlikely. I would go so far as to say there is no human walking around the earth that has spent more time with both Donald Trump and Ron DeSantis than I have.

“I spent a lot of time with the president in the Oval when he was leading our country. I was Governor DeSantis’s transition chairman and I was heavily involved in his campaign.

“What I can tell you is these guys are on the same side. We want to see a Republican Party that is a national party, a winning party, a fighting party.

“I think President Trump really views DeSantis’s success with great pride, that he took someone who was in Congress and that he saw great potential in and he nurtured that leadership that Ron DeSantis has now displayed to the world.

“It’s a great working relationship that all three of us have.

“So, I think it’s largely a media creation that they want to find ways to cause schisms and disagreements in our movement.

“My expectation is they will both be back in the White House one day.

“I think Donald Trump will probably be back in the White House in 2024, but for many years I’ve held the view that Ron DeSantis will be president one day and I’ve seen nothing that would in any way dampen that.”

“I think that if Donald Trump runs, and I do expect him to run, that Ron DeSantis will understand the energy and the magnetism that President Trump brings and will likely do what he always has and that is be one of Donald Trump’s best campaigners and best surrogates.

“Look, there is a reason we won Florida by such a large margin—a margin that people never really see in Florida—in the 2020 election for Donald Trump.

“It was because he and Ron DeSantis were out there hand in glove campaigning together and getting crowds fired up together.

“Here, they are on different nights but at the same conference—we’re going to need both of those great leaders in order to I think have a catchment apparatus for the energy and enthusiasm that is out there for Republicans.

“There is not a person in politics who is serious who doesn’t think we’re going to take the majority.

“The operative question is what will we do with it?

“There was a lot more swamp left to drain even when Donald Trump left office.

“I don’t want to be in a circumstance where Republicans win by default and then lack the vision and the clarity to understand what our compact is with our voters,” he said.

AOC Warns Dems Against Strategy: “Should have learned that lesson with Trump in 2016”

Nick Sandmann Fires Back After Judge Tosses Lawsuits Against 5 Media Companies: “I’m appealing the decision in the sixth circuit”