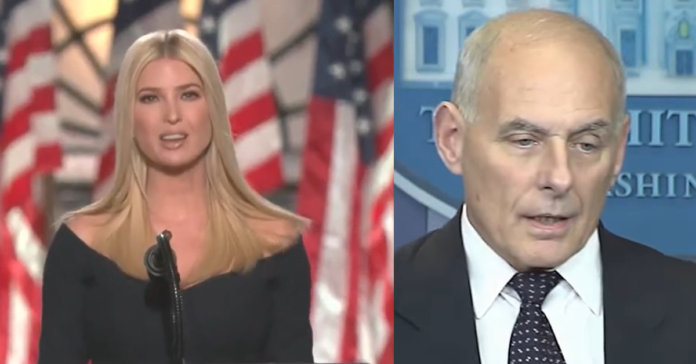 Jared Kushner has a new book, “Breaking History: A White House Memoir,” coming out on Aug. 23 and a few excerpts have been given to the media to help promote the book.

Kushner takes a few swipes at Kellyanne Conway and Steve Bannon and others accusing them of leaking to the media but saves some harsh criticism for John Kelly who served as chief of staff for Trump.

Kushner writes: “One day he had just marched out of a contentious meeting in the Oval Office. Ivanka was walking down the main hallway of the West Wing when she passed him. Unaware of his heated state of mind, she said, ‘Hello, chief.’

“Kelly shoved her out of the way and stormed by. She wasn’t hurt, and didn’t make a big deal about the altercation, but in his rage Kelly had shown his true character.

“Then the four-star general would call her staff to his office and berate and intimidate them over trivial procedural issues that his rigid system often created.

“He would frequently refer to her initiatives like paid family leave and the child tax credit as ‘Ivanka’s pet projects.’”

Kushner says that Kelly did come and offer a weak apology for the shoving incident which was accepted by Ivanka.

“It is inconceivable that I would ever shove a woman.

“Also, don’t remember ever apologizing to her for something I didn’t do. I’d remember that,” he said.

Kushner also reveals that he had thyroid cancer while serving in the administration.

“It is inconceivable that I would EVER shove a woman. Inconceivable,” Kelly said in responsehttps://t.co/ANvj212fZG

Conservative Anti-Trump Journalist Has an Amazing Change of Heart, "I Was Wrong About Trump"