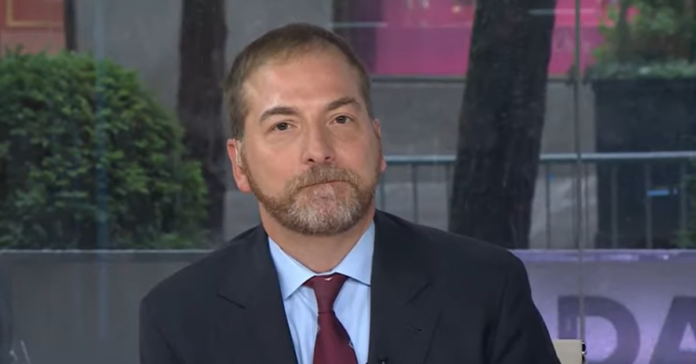 NBC’s Chuck Todd has seen his ratings sink like a stone over the last few months for his Sunday show Meet the Press. Todd took over from David Gregory in 2014 and just saw his worst ratings period since he took over the Sunday morning chair.

“This does not augur well for Chuck,” a television industry insider said.“Chuck lost his gig at MSNBC and the guise that he’d rather leave MSNBC completely and focus on Meet the Press on Sunday.

“But when you are focusing on the Sunday show and it is in freefall, perhaps you have to consider whether it is you and not the show itself that is driving viewers away.

“NBC News Chairman Cesar Conde must really be concerned. This is like David Gregory all over again.”

“In top-secret ratings data that has caught the attention of network brass, RadarOnline.com has learned Meet The Press — the longest running show in television history — recorded its lowest rated quarter over the April-May-June period.

“Todd peaked at more than 4 million viewers in the first quarter of 2017 (January-February-March) in the midst of Donald Trump’s presidency.

“But in recent Nielsen Media Research ratings, the magic number faded to a paltry 2.4 million — shaving off a third of the notoriously goateed anchor’s audience.

“Making matters even worse for the Peacock network and its executive, Todd has also been in ratings free fall with viewers in the younger A25-54 demo.”

NBS issued a statement when they moved Todd’s daily show on MSNBC to streaming only:

“Building on its position as the nation’s fastest-growing streaming news network, NBC News NOW will add new anchors and original shows to its lineup of daily programming.

The new lineup will include Meet the Press NOW, anchored by Chuck Todd, streaming at 4 p.m. ET Monday through Friday beginning Monday, June 6.

Featuring more live original programming than any other news streaming network, viewers get free access to the day’s headlines, world-class reporting, and breaking news from the nation’s most trusted journalists.

“NBC News is the leader in streaming news,” NBC News President Noah Oppenheim said. “Since our launch, we’ve been committed to delivering the best of NBC News’ journalism, free, to streaming audiences everywhere.

Chuck was one of the first broadcast anchors to see the massive potential of streaming and bringing Meet the Press’s daily franchise to NBC News NOW reinforces the platform’s status as the destination for news on streaming.”

Todd, who serves as NBC News’ political director in addition to moderating the Sunday program, has led a rapid expansion of the Meet the Press brand across broadcast, audio, newsletters, and streaming, and Meet the Press NOW advances the team’s early commitment to News NOW, where Todd has anchored Meet the Press Reports — which takes an in-depth look at one hot-button issue each week — for four seasons.

Meet the Press NOW will also launch with a new audio showcast, adding to NBC News’ leading podcast lineup and allowing consumers to access NBC News’ unparalleled political reporting and analysis on their preferred platform. In recent months, the team has also launched “Meet the Midterms” — a long-term focus on reporting from key battleground states — and will produce a series of election night specials on NBC News NOW moderated by Todd that will feature news, data and analysis during each major primary night of the 2022 primary season,” the statement said.