AOC Warns Dems Against Strategy: “Should have learned that lesson with Trump in 2016” 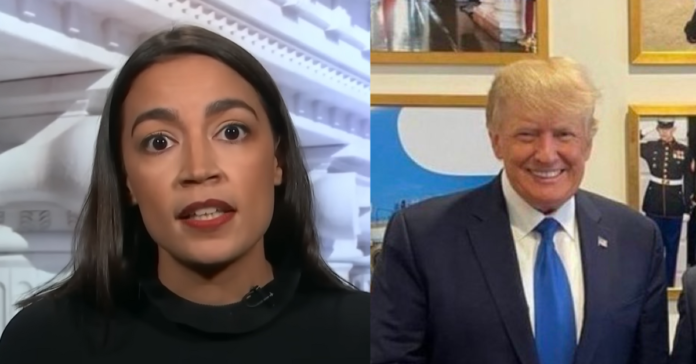 Representative Alexandria Ocasio-Cortez of New York slammed Democratic leaders’ election strategy of trying to meddle in Republican primaries to try to pick candidates they think will be easier to beat in a general election calling it dangerous.

Dangerous and duplicitous because as the Dems run around the country with nothing to campaign on because Biden has been such a disaster, they pivoted to scaring the faithful with ‘the GOP is a danger to democracy’ even though the GOP stands to win the midterms.

But when news broke that Dem leaders are financially backing some of these candidates you know they are full of it because both things cannot be true. AOC also reminded them that that was Hillary Clinton’s strategy, and the last time the Dems tried this they lost three Supreme Court seats.

AOC said: “I don’t think we should be elevating dangerous elements of the right-wing. Democrats who have that type of thinking should have learned that lesson with Trump in 2016 but, I personally am not supportive.”

A CNN panel including Manu Raju, Kasie Hunt, Jeremy Diamond, and Hans Nichols also trashed called the strategy to fund ads for Trump-supporting candidates saying that it contradicts their message the GOP is a danger to democracy.

Diamond said, “I think we need to acknowledge that it is a clear strategy, not only have we seen it in Maryland but we’ve seen it play out across gubernatorial races in several other states.

“They are trying to get the more extreme candidate to face the Democrat in the general election. They believe that it gives them a better chance. But of course, it raises the questions that Gov. Hogan raised about them playing with fire and the dangers of this.

“If Democrats are going to say about these January 6th hearings that democracy is under attack, how can you then also go ahead and prop some of these candidates up?

Diamond said it is “going to be one of the Democrats’ central midterm messages, that the GOP is more extreme than whatever you may think about the Democrats’ leftward pull.

Hunt said “propping up these kinds of candidates is contrary to everything else you are telling the American people about where you stand.

“If it ends up that some of these extreme candidates that they’ve propped up get elected actually do make moves in 2024 that jeopardize our presidential election process, they’ll have to answer for that.”

“It’s not just contrary, it undercuts the whole argument.

“When Democrats tell you that the greatest threat to democracy is Donald Trump-like candidates and the very fate of our republic rests on defeating them and at the same time they are bolstering them for partisan advantage in a tight race.

“Both arguments can’t be true.

“You see why they’re doing it and you see there are obvious strategic advantages and tactical advantages.”

Hunt said, “It might not work and that’s the difference.”

“Be careful what you wish for,” Nichols warned.

“I mean they wished to run against Donald Trump in 2016,” Hunt reminded, “and look where that got them.”

Democrats are wading into GOP primaries, propping up election deniers they think are easier to beat in November. But are they playing with fire? @MariannaReports @kasie @JDiamond1 @mkraju #InsidePolitics pic.twitter.com/QFBXp6D9Bs

Half of GOP voters say they want someone other than Trump as their 2024 nominee, and Republican leaders say they want a competitive primary. But would a crowded field help Trump win the nomination, just like it did in 2016? @kasie @HansNichols @jdiamond1 weigh in #InsidePolitics pic.twitter.com/fMh7SzDxOA

Where Are They? Does Biden Have a New "White House Stage"?

Matt Gaetz Denies Rumors DeSantis Will Run Against Trump: “These guys are on the same side, largely a media creation”