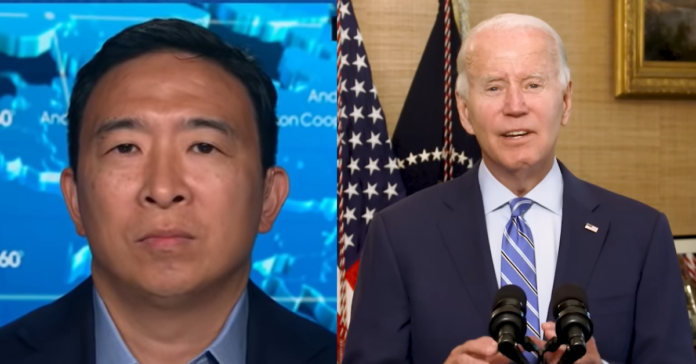 They want to appeal to independents and disaffected Dems and Republicans who have soured on the dysfunctional two-party system but they will undoubtedly hurt the Dems, especially Biden’s fragile and shrinking coalition, more.

The new party is called Forward. It will be co-chaired by Yang and Christine Todd Whitman, the former Republican governor of New Jersey. According to NBC: “The merger involves the Renew America Movement, formed in 2021 by dozens of former officials in the Republican administrations of Ronald Reagan, George H.W. Bush, George W. Bush and Donald Trump; the Forward Party, founded by Yang, who left the Democratic Party in 2021 and became an independent; and the Serve America Movement, a group of Democrats, Republicans and independents whose executive director is former Republican congressman David Jolly.”

We’re not just a new party, we’re a new kind of party.

The Forward Party stands for doing, not dividing. That means rejecting political extremes and working together to take real action on every important issue for the unrepresented majority in American politics.

We’re not building a copy of the current parties, which are dragging our country backwards. We’re moving American politics forward, with a party focused on innovative, collaborative, and common-sense solutions that work for the majority.

The Forward Party will welcome new ideas and fearless conversations around the issues of the day. We won’t silence debate or refuse to adapt to the modern world.

Bottom-Up, Not Top Down

The Forward Party will empower leaders to find solutions that work in their communities. We won’t dictate a rigid, top down policy platform and expect it to work for all Americans.

The Forward Party will create a political home for everyone willing to set aside the partisan extremes and find practical ways to make this country better. We won’t be checking IDs to see if people are Democrats, Republicans, or Independents.

Work Together, Not Against

The Forward Party will strive for collaborative solutions, make sure they work, and try something else if they don’t. We won’t ignore problems so that we can use them to drive wedges between Americans; nothing gets done when opposing views are treated like enemy positions.

The Forward Party will approach each other with grace and tolerance, finding ways to pick people back up rather than knock them down. We won’t cancel people or cast them out of the party for not falling in line.

Andrew Yang joins with a bunch of Republicans to do his level best to siphon votes away from the Democrats in coming elections. I remember how so many on this site, liberals and leftists, thought I was too harsh on him in the 2020 race and thought he was a breath of fresh air. https://t.co/7rnGNT8kfX

Dems Are Taking Down Biden As We Speak, And They Just Flung Fresh Dirt All Over Him