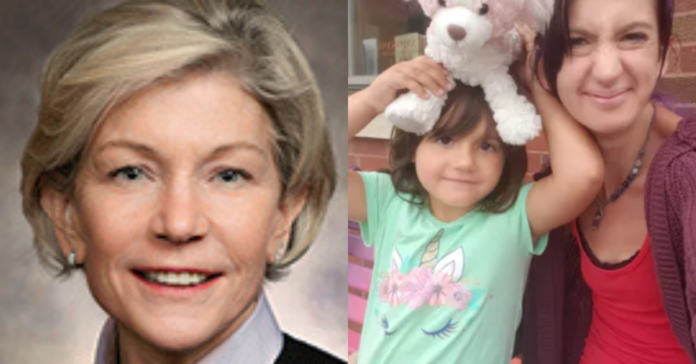 Wisconsin Democrat Minority Leader Janet Bewley was involved in a car crash that resulted in the deaths of two people. The prominent Democrat was on the phone with a reporter when she pulled into the path of an oncoming car according to media reports.

Twenty-seven-year-old Alyssa Ortman of Pennsylvania and her 5-year-old daughter, Khaleesi Fink, died in the crash.

“The preliminary investigation showed that the accident occurred when a vehicle driven by Janet Bewley, age 70 of Mason, WI, pulled out from the entrance of Maslowski Beach to turn east onto US Hwy 2,” the police department said. “That vehicle collided with a vehicle that was westbound on US 2 driven by Alyssa Ortman, age 27 of Clearfield, PA. That vehicle then spun across the highway and was struck by an eastbound vehicle.”

“This is a heartbreaking event for the community. Our thoughts and prayers are focused on the individuals involved, their families and their loved ones,” a statement released by Bewley’s office said.

“Senator Bewley, who was not seriously injured in the accident, wants to thank all the dedicated law enforcement and emergency medical personnel who helped in the aftermath of the accident.”

“My grandbaby, who was just starting out, just getting ready to start kindergarten — her life’s gone,” Ginger Urbanik said in an interview.

“And my daughter, who had so much to look forward to, and so much that she wanted to do good in the world, and all of her plans and now both of our children, within a matter of years, are gone.”

According to USA Today:

Bewley, a Democrat who represents a district that covers the northwestern part of the state, pulled into the path of a car driven by 27-year-old Alyssa Ortman of Pennsylvania, according to police in Ashland, Wisconsin.

When Ortman’s car collided with Bewley’s, it spun and was hit by another vehicle driven by 45-year-old Jodi Munson.

“Ashland Police Chief Bill Hagstrom said the Wisconsin State Patrol is investigating the crash and should wrap up its review this week. At that point, the matter will be referred to the Ashland County District Attorney’s office to consider whether to file charges.

“Bewley had cataract surgery the day before the crash and was on the phone with a Journal Sentinel reporting intern when the crash occurred. Police have not yet determined how the crash began.