Trump Fires Back At Adam Schiff: “His head is shaped like a watermelon, he’s a very unattractive man” 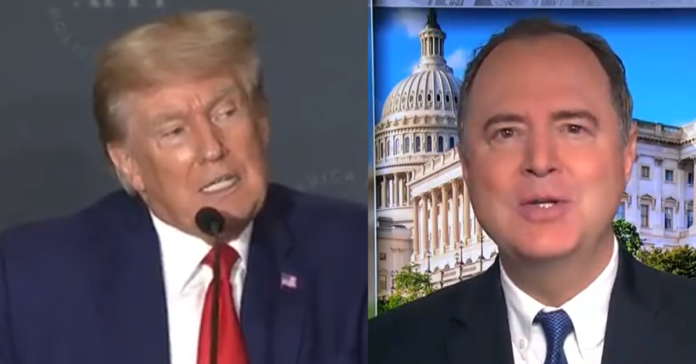 Former President Donald Trump fired back at Dem Rep Adam Schiff during his first speech in Washington DC since he left office. Trump slammed the Democrats for falling asleep on the job and allowing violent criminals to run free.

Schiff, most people forget, led the charge to spread false information about the Trump Russia investigation on any cable network that would have him. Trump said yesterday about his nemesis, Adam:

“His head, as I think you know, is shaped like a watermelon. He’s a very unattractive man.” Trump continued: “Our country is now a cesspool of crime. We have blood, death and suffering on a scale once unthinkable because of the Democrat Party’s effort to destroy and dismantle law enforcement.

“There’s never been a time like this. Our streets are riddled with needles and soaked with the blood of innocent victims.

“Many of our once great cities — from New York to Chicago to LA — where the middle class used to flock to live the American dream are now war zones, literal war zones. Every day, there are stabbings, rapes, murders and violent assaults of every kind imaginable.”

About an hour and 20 minutes into his speech, Trump has reached the part of attacking the Russia investigation & Rep. Adam Schiff: “His head, as I think you know, is shaped like a watermelon. He’s a very unattractive man.”

“The message sent by jailing this man was that if you’re attacked, you must lie down as an act of sacrifice and let yourself be pummeled and beaten to death to uphold the Left’s vision of reimagining public safety,” Trump said of Jose Alba the bodega worker.

“The vision is sick,” he said.

Trump: “What this corrupt establishment is doing to me is all about preserving their power and control over the American people… They really want to damage me so I can no longer go back to work for you. And, I, don’t think that’s going to happen.” pic.twitter.com/80G7GKEKLu

President Trump on deconstruction of the Administrative State:

“We need to make it much easier to fire rogue bureaucrats who are deliberately undermining democracy.” pic.twitter.com/TiKyBJL67a

President Trump: “Adam Schiff is a sleaze ball, everybody knows it. Not a dumb person by the way. You know we’re not dealing with dummies, but he’s a sleaze ball. You take a look, perfect watermelon head.” https://t.co/Xc61iYW8px

Brittney Griner Says Her Rights Were Not Read To Her When She Was Arrested In Moscow, Says Bad Translator Gave Incomplete Info