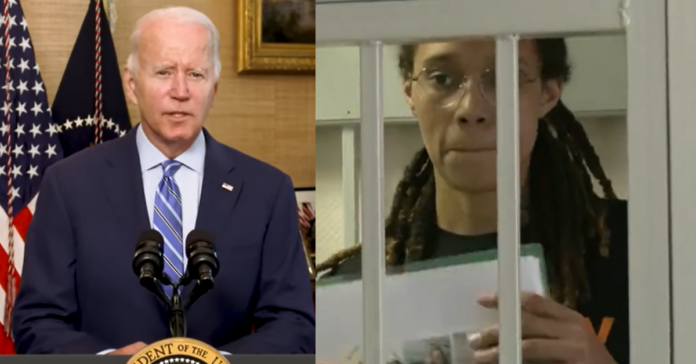 After months of debate President Joe Biden and his team of fools have offered to exchange Viktor Bout, a convicted Russian arms trafficker serving a 25-year US prison sentence, for Brittney Griner and Paul Whelan according to CNN.

“We communicated a substantial offer that we believe could be successful based on a history of conversations with the Russians,” a senior administration official told CNN Wednesday. “We communicated that a number of weeks ago, in June.”

The Department of Justice is opposing the move and while it may embolden Putin to snatch more Americans Biden can’t leave them over there to rot or worse. As bad as he has been, he at least knows he has to do this, although why it took him months to act is a mystery. Putin may still humiliate him by asking for a lot more so the deal is far from over.

The official added: “It takes two to tango. We start all negotiations to bring home Americans held hostage or wrongfully detained with a bad actor on the other side.

“We start all of these with somebody who has taken a human being American and treated them as a bargaining chip.

“So in some ways, it’s not surprising, even if it’s disheartening, when those same actors don’t necessarily respond directly to our

“Whatever the kind of moral indignity of them holding innocent people and trying to extract from us someone like a Mr. Yaroshenko, who is the opposite of that, we nonetheless are so committed to bring our people home that we will make those painful choices in certain circumstances,” the senior administration official told CNN.

Among senior Biden administration officials, the idea of prisoner swaps gained new momentum earlier this year after the successful release of Trevor Reed, a former Marine who was held captive in Russia for more than two years.

Reed was traded for Konstantin Yaroshenko, a Russian pilot then serving a 20-year federal prison sentence for cocaine smuggling conspiracy.

Biden officials had been concerned the decision to swap Reed for Yaroshenko would be criticized by Republicans. Instead, it won bipartisan praise.

WNBA star Brittney Griner testified Wednesday during her trial in Russia. She faces up to 10 years in prison.

Speaking through a translator: “I remember one time there was a stack of papers that the translator needed to translate for me.