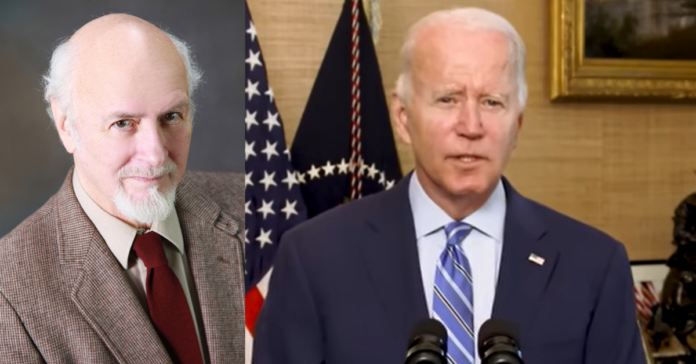 President Joe Biden just got some terrible news because Biden has his first official primary challenger for the 2024 Dem Party’s nomination for president. Political activist Jerome Segal announced his decision to run for the nomination from the Democratic Party this week trashing Joe Biden in the process.

“I was planning to delay the announcement of my candidacy until after the mid-term elections,” Segal said. “My decision to go public right now was triggered by Joe Biden’s embarrassing trip to the Middle East.”

Segal’s announcement comes less than a week after lost in a bad way in the Democratic gubernatorial primary in Maryland. Segal also ripped Biden for his decision “to fist bump a psychopathic killer,” meaning Saudi Crown Prince Mohammed bin Salman.

“My main work over the last 40 years has been dedicated to conflict resolution, in particular regarding the Israeli-Palestinian conflict, and I believe we must work in America to reverse the trend toward a new civil war,” Segal said.

“So, I will run against Joe Biden, and I will run on two primary issues:

“How to bring the simple living option to all Americans and how to bring peace to the Middle East.”

According to Maryland Matters:

Fresh off his 0.65% showing in the Democratic primary for governor last week, author and former college lecturer Jerome Segal announced Monday that he plans to seek the Democratic nomination for president in 2024.

Segal, 78, is nothing if not a profile in persistence: He sought the Democratic nomination for U.S. Senate in 2018, created the national Bread and Roses Party and ran for president on that ticket in 2020, shut down the party last year and ran for governor as a Democrat, and is now looking again to the White House.

“Other politicians who have been floated as possibly running against Biden in the Democratic primary include: Vice President Kamala Harris, Georgia gubernatorial candidate Stacey Abrams, California Governor Gavin Newsom, Transportation Secretary Pete Buttigieg and Senators Bernie Sanders and Amy Klobuchar. None of them have confirmed that they will run for the presidency in 2024.

Transportation Secretary Pete Buttigieg narrowly beat President Biden in a new 2024 presidential preference poll of New Hampshire Democrats — a bad sign for Biden if he plans to run for a second term.

Buttigieg, 40, had the support of 17% of likely Democratic primary voters in the University of New Hampshire survey released Tuesday — versus Biden’s 16%.

The poll found that 74% of Democrats in the early-primary state said they don’t want Biden to run again as inflation hits four-decade highs.

My neighbor is running for president: https://t.co/P5ReJ8AqYN

President Joe Biden continues to receive bad news from polls inquiring about his prospects for the 2024 election. https://t.co/wpRaG87DWA pic.twitter.com/iSBYysrL9m