Jeanine Pirro Slams Kamala Harris: “She’s A Failure Because She’s Lazy And Not Interested, She Should Be Out There Every Day Doing Somehting” 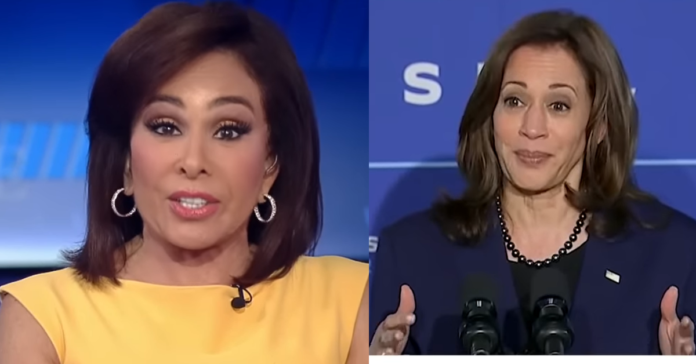 Judge Jeanine Pirro slammed a new report claiming that Vice President’s abject failures are President Joe Biden’s fault because she is stuck in his shadow and has saddled her with tough jobs like solving the southern border fiasco.

Pirro said: “She is who she is, but I don’t blame Joe. I don’t blame the fact that she is in a position of vice president and therefore gets the tough jobs. That is nonsense. Don’t give me this garbage that Joe Biden is not giving her a chance.

“She is lazy and she is not interested. That’s why she is a failure. You are a vibrant woman at the prime of your life. You are the vice president of the United States. (See Video Below)

“You are quick, you’re sharp, you’ve run for office before.

“You should be out there every day doing something.

“I don’t care if he gave you the border to deal with.

“You should be out there getting women together, getting business people together, baby formula, whatever it is.

“You get out there, and you be heard.

“You’re not controlled by Joe Biden, he does not tell you what you do.

Jesse Watters said Biden is to blame. He said:

“Joe has only given her things that he did not want to deal with.

“He has not given her any position where she can shape policy.

“He only picked her because she was the female of color, and then once he got elected, he kicked her to the curb.

“So he should be grooming her to be the heir apparent, and he has failed to do so.”

But it was Co-host Greg Gutfeld who delivered the knockout blow joking that Kamala Harris was the “best decision” Biden ever made, “because no one wants him to go anywhere. “

“I pray for his health every single day,” he said.

“Because then it’s her.”

She’s lazy and she’s not interested. That’s why she’s a failure! #TheFive pic.twitter.com/jmg9CxoLnc

.@JudgeJeanine takes media to task for Kamala Harris ‘stuck’ defense: ‘She is lazy and uninterested’ https://t.co/Pomcuz2UrC