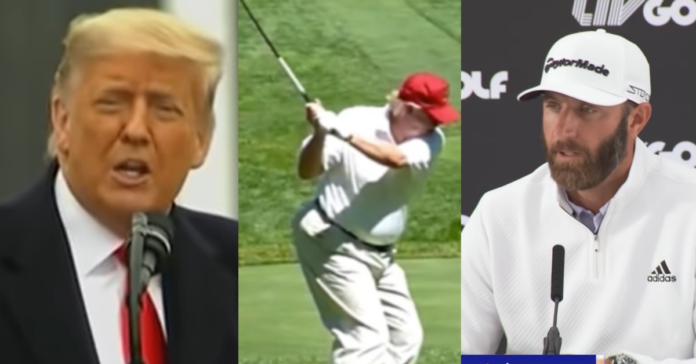 Former President Donald Trump will play in this week’s LIV Golf Invitational at his Trump National Golf Course in Bedminster, NJ. Trump will play with Bryson DeChambeau and Dustin Johnson in Thursday’s pro-am ahead of the first round.

Charles Barkley, Caitlyn Jenner, and Lawrence Taylor will also participate in Thursday’s pro-am. Barkley is in serious talks to join the LIV Golf series as an announcer.

“I’m not gonna keep TNT in limbo,” Barkley said. “I don’t think it’s fair to them. They’ve gotten plenty of play out of me coming to play out there Thursday. I’m not just gonna be no show pony.

“Don’t be wasting my time. I’m not gonna waste y’all time. When I leave New Jersey Thursday night, when I leave the golf course, if I don’t have an offer, it’s over.”

“I don’t know much about the 9/11 families,” Trump told the Wall Street Journal interview this week.

“I don’t know what is the relationship to this, and their very strong feelings, and I can understand their feelings.

“Former President of the United States Donald Trump will tee it up alongside Dustin Johnson and Bryson DeChambeau in the first group out at 10 a.m. ET.

“The rest of the pro-am participants have yet to be announced.”

President Donald Trump will be playing in the LIV Golf Pro-Am tomorrow with Dustin Johnson and Bryson DeChambeau.

LIV Golf’s Invitational at Trump Bedminster is shaping up to be the 2nd most prestigious tournament of the year only behind The Masters.

More Border Crossers Have Been Found Dead On Our Side Of The Border Than EVER Before!!