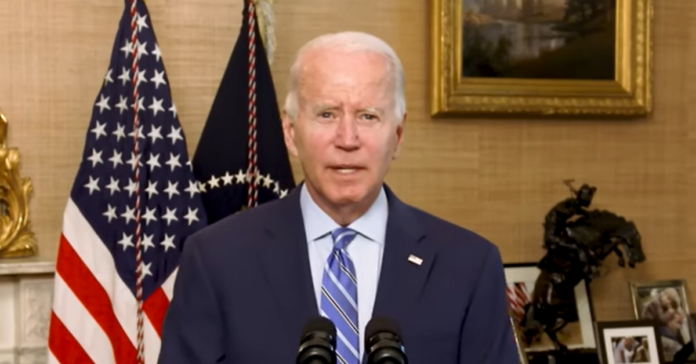 Fifty-four Republicans called for President Joe Biden to take a cognitive test over questions about his fitness for office. They sent a letter to Biden demanding he take the cognitive test, as Trump did, and make the results available to the American people.

“We again write to you to express concern with your current cognitive state and to urge you to submit to a cognitive test immediately. We believe that, regardless of gender, age, or political party, all Presidents should follow the example set by former President Trump to document and demonstrate sound mental abilities.

While you underwent your annual physical exam on November 19, 2021, you either did not face a cognitive test or those results were withheld from the public. White House Physician Kevin O’Connor, D.O., attested to you being “fit to successfully execute the duties of the Presidency” in a very superficial, and purely physical manner; however, we are worried about your mental abilities.

As you may remember, multiple Members of Congress joined together to send you a letter on this issue on two separate occasions since the start of this Congress. The first was in June of last year and the second was in February of this year, however you have not replied to either of these letters.

Since then the American people have continued to lose faith in your ability to effectively and competently handle your duties as President of the United States. This is reflected by recent polling which shows that:

66% of voters believe that you should take a cognitive test.

56% of voters are not confident that you are physically and mentally fit for your duties as President, representing a 39-point change from October 2020.

64% of voters believe you have shown signs that you are too old to execute the duties of the President of the United States, including 60% of respondents aged 65 and older.

Only 33% of voters approve of the job that you have done as President.

While you have largely brushed aside these assertions as partisan political attacks, the left-leaning New York Times recently published an article outlining all of this in great detail.

According to the New York Times, the increased scrutiny surrounding your cognitive state has been fueled by your recent public appearances, during which you shuffle your feet when you walk, often slur your words, lose your train of thought, have trouble summoning names, and appear momentarily confused.

All of this was exemplified during your most recent trip to the Middle East, where you claimed that we must “keep alive the truth and honor of the Holocaust,” among other things.

The article also noted the numerous times that your staff has had to walk back some of your gaffes, such as your vow to direct a military response if China attacks Taiwan, or your assertions for a need to remove President Putin from power.

The article further outlined your need to delay the aforementioned Middle East trip so that you would have more time to rest, as your advisors felt that ten days of overseas travel might be unnecessarily taxing for you.

These assertions are extremely concerning and cast doubt upon your ability to handle the duties required of the President of the United States, which poses a very serious national security risk.

These recent gaffes are not isolated incidents, as they are part of a larger history of your actions which exemplify cognitive decline. The Alzheimer’s Association lists “changes in mood and personality,” including being more “easily upset” as one of ten signs of mental decline.

You displayed this type of mood change during a cabinet meeting on January 24, 2022, when you apparently did not know your microphone was on after finishing your opening remarks, and you used profanity to refer to a member of the White House press corps in response to a question asked on inflation.

Further, in a December 16, 2021 press conference with the White House Covid-19 response team, you appeared to be unable to read the numbers in front of you. When attempting to announce the total number of the population who had received a booster shot, you said, “57… excuse me… 570… I don’t want to read it, I’m not sure I got the right number…” before being corrected by Dr. Anthony Fauci with the right statistic of 57 million.

On the campaign trail, you often forgot the names of states that you were in for campaign rallies, and in one instance misidentified the office you were running for. The Alzheimer’s Association points out “confusion with time or place” as another of the ten signs and symptoms of mental decline.8

In February 2021, you publicly forgot the purpose of your visit to survey the winter storm damage in Texas.

In March 2021, you forgot the name of the Pentagon, the Department of Defense, and the Secretary of Defense.1

Lastly, in May 2021, you told a story from your tenure as Vice President in which you stated that you regularly visited your sick mother via Amtrak in 2013, even though she passed away in 2010.

The American people should have absolute confidence in their President, knowing that he or she can perform their duties as Head of State and Commander in Chief. They deserve full transparency on the mental capabilities of their highest elected leader. To obtain the level of transparency that the American people deserve, we once again urge you to submit to a cognitive test immediately.

Further, we implore you to publish the results of this test after its conclusion, so the American people may be informed on your full cognitive capabilities, and so that you may continue this example for all Presidents going forward.

This is not an unprecedented request. Starting in 2018, political opponents and members of the media clamored for your predecessor, then-President Trump, to take a cognitive test. In response, the White House Physician conducted a Montreal Cognitive Assessment (MOCA) for President Trump, at which he excelled.

According to Dr. Ziad Nasreddine, the neurologist who created the test, MOCA is a simple screening tool to identify early signs of mental impairment.11 Dr. Nasreddine said the test is best administered when a person or their loved ones “start noticing mental decline.”

This particularly includes forgetfulness on ordinary tasks, something that you have routinely exhibited throughout your tenure. We believe that this examination should be a routine part of any physical examination for every President.

This is also not a partisan issue. As Democrat Representative Jamie Raskin previously pointed out, with many politicians and the population at-large growing older, “it’s not hard to think that there will be future situations where the President’s physical and mental state may create issues for us.”

At the time of this quote, Representative Raskin introduced legislation to establish an independent commission that could examine a President’s fitness for office and determine “whether the President is mentally or physically unable to discharge the powers and duties of the office.”

We agree with these statements. As such, we encourage you to follow the example set by President Trump, by undergoing a cognitive test as soon as possible and immediately making the results available for the American people,” the letter said.

Many Folks Very Suspicious of These Two Videos of Joe From the SAME Day... You Decide